Ethnic Mongolians Protest Against Chinese Attempts To Wipe Out Their Culture 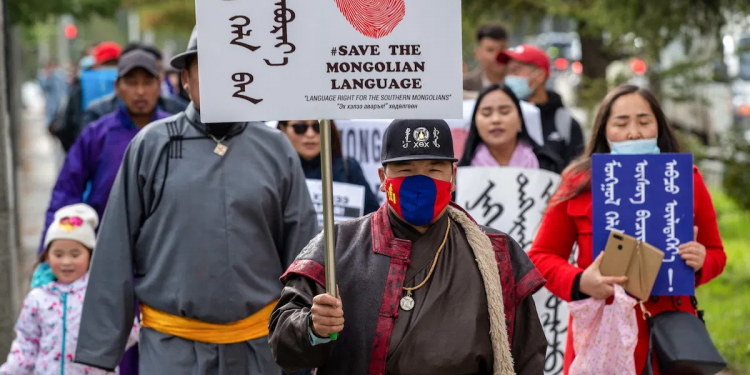 Beijing (Aryavath): Ethnic Mongolians in China’s Inner Mongolia region have come out in protest against a new educational policy under which Inner Mongolia students will be taking classes in language, history and politics entirely in the Chinese language. They believe it endangers the Mongolian language and attempts to assimilate all ethnic minorities in a united “Chinese nation”.

Introduced on September 1 by the Chinese Communist Party (CCP), the new policy plan states that from 2022 onwards, Inner Mongolia students will be taking classes in language, history and politics entirely in the Chinese language. This policy has worried protesters, who believe that it will lead to the diminishing of Mongolian culture and language in the region,
According to a report by Mizzima, the latest move by the CCP to ‘Hanize’ Inner Mongolia is part of the drive by the state to unify the entire country ethnically and ensure that China has a single language and culture.

Chen further mentioned an April 2019 Report of the Finnish Institute of International Affairs (FIIA), titled “Sinification of China” by Jyrkio Kallio, which asserted that “The Communist Party of China is obsessed with national unity. According to the traditional and still largely prevailing understanding of history in China, without unity, there would be chaos, as was always the case during periods of disunity.”

Chinese scholars often state that the minorities in the country have historically remained on the periphery and therefore require to be unified with the Chinese nation, to justify the use of this process.

“The historical narrative of China as perceived by the CCP is that of the country always has been a single, unified nation. The reality, in fact, is quite different when it comes to regions/provinces like Xinjiang, which literally means “new frontier”, Chen’s article in Mizzima said.

Muslim Uighurs in China are forbidden to practice their religion and are sent to re-education camps for the slightest violation of rules. According to a White Paper issued by the State Council of China, which aimed to defend the training programme, noted that the regional Xinjiang government provided vocational training to averagely 1.29 million urban and rural workers every year from 2014 to 2019.

Out of these workers, around 451,400 occupants of the camps came from southern Xinjiang – an area it said had struggled with extreme poverty, poor educational access, and lack of job skills because the residents were influenced by “extremist thoughts”.
China has received widespread criticism from the world over for its rigorous persecution of Uighurs.

Recently, over 300 people had gathered at the Trocadero square near the Eiffel Tower in Paris to protest against the human rights violations in China and join the global resistance against the Chinese Communist Party.