Reservation in admissions made mandatory for Andhra junior colleges 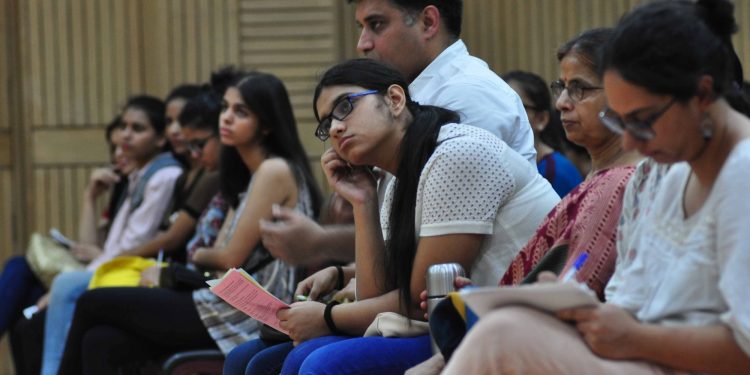 New Delhi: Students with their parents at a counselling session organised during the ongoing admissions at the Delhi University, on June 24, 2019. (Photo: IANS)

Amaravati, Jan 6 (Aryavarth) In a significant move, the Andhra Pradesh Board of Intermediate Education (BIE) has made it mandatory for all intermediate colleges to implement reservations in admissions from the academic year 2020-21, which will begin from January 18 after the delay caused by the Covid-19 pandemic.

“The principals are directed to follow the norms of reservation in admissions as per the rules in force. Any deviation will be viewed seriously and suitable action will be initiated as per rules,” BIE secretary V. Ramakrishna confirmed to IANS.

Besides these, 33.3 per cent of the total seats should also be reserved for girl students category-wise where there are no separate colleges for them.

According to Ramakrishna, affirmative action or reservations in intermediate colleges is not new but nobody cared to implement them all these decades.

Most students didn’t even know that they were eligible for reservations all these years, a procedure that was blatantly violated by almost all the colleges.

He said the BIE, regulator of the two-year course, which has been massively abused by entrenched corporates players, will ensure that the reservation rules are followed by each and every college, including carrying out surprise audits of colleges.

Ramakrishna, a 2009 Indian Revenue Service (IRS) officer said he and the principal secretary were shocked to learn that a corporate college with a strength of about 1,000 students had less than five ST students when they paid a visit recently.

Meanwhile, the board has also issued the admission calendar for the Covid shortened 2020-21 academic year, which will begin from January 18.

“As per the orders of the High Court, BIE is going for offline admissions for this academic year and all principals are requested to take special care in enrolment of students,” he said.

Though BIE envisioned to implement only online admissions to root out all the exploitative tactics followed by the colleges, the HC has ruled against this endeavour.

Junior colleges have to complete admissions by January 17, including offering provisional admissions based on printouts of intermediate marks sheets downloaded from the internet.

“The original SSC pass certificates, caste certificates etc. shall be returned to the candidate immediately after verification. Holding of certificates will be viewed seriously and action will be initiated against the managements,” Ramakrishna said, cracking down on the notorious excess aimed at gaining complete domination over a student.