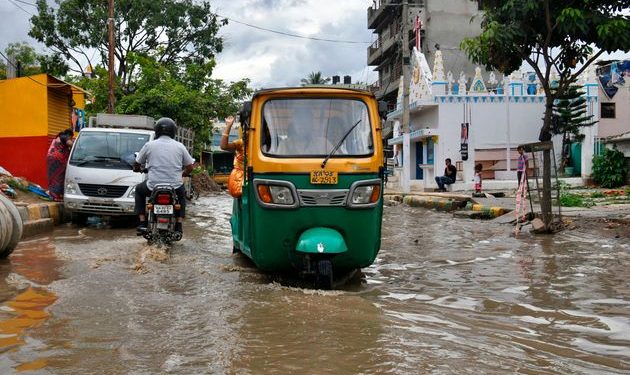 Bengaluru, Aug 9 (Aryavarth) A red alert has been sounded in seven districts of rain-ravaged Karnataka where one more death was reported on Sunday, taking the toll to 13. According to the Karnataka State Natural Disaster Monitoring Centre, there would be heavy rain for the next 24 hours in coastal areas, in the northern and in the interior parts of the south.

The red alert has been issued in Dakshina Kannada, Udupi, Uttara Kannada, Chikkamagaluru, Hassan, Kodagu and Shivamogga as they would get heavy rainfall.

As on Sunday, Cauvery and Krishna rivers were flowing above the danger mark, and the sluice gates of the dams were opened. Due to the release of water, many regions in the low- lying areas were inundated.

In view of the swollen Cauvery river, the Mandya district administration put barricades near the Sri Nimishamba Temple near Ganjam in Srirangapatna Taluk to ensure the safety of public in general and pilgrims and tourists in particular.

“The public is not allowed to venture into the Cauvery River as a precautionary measure,” read a statement issued by the office of the Deputy Commissioner of Mandya District Dr M V Venkatesh.

In Kodagu, the situation remained grim due to a heavy downpour and incidents of landslides were reported.

Congress state president D K Shivakumar, on a two-day tour of Kodagu from Saturday, visited many relief camps and spoke to the people there.

Also, he inspected a few places which suffered severe damages due to landslides.

Later, Shivakumar issued a statement saying the district has been suffering rain-related damages and all political parties should come to the aid of the people.

In Belagavi, reports emerged that a youth got swept away in the rain.

In Mysuru, the Hebbal lake was overflowing.

Eighty relief camps have been set up to house 1,600 people as 278 houses have been fully damaged and 2,140 partially damaged, according to the disaster Monitoring Centre.

A total of 23 animals have perished in the rains which destroyed 31,541 hectares of crops while inundating 35,000 hectares of horticultural crops.

The State government has released Rs 50 crore as an initial amount to carry out relief and rehabilitation work.