Angry K’taka farmers throws traffic out of gear in Bengaluru 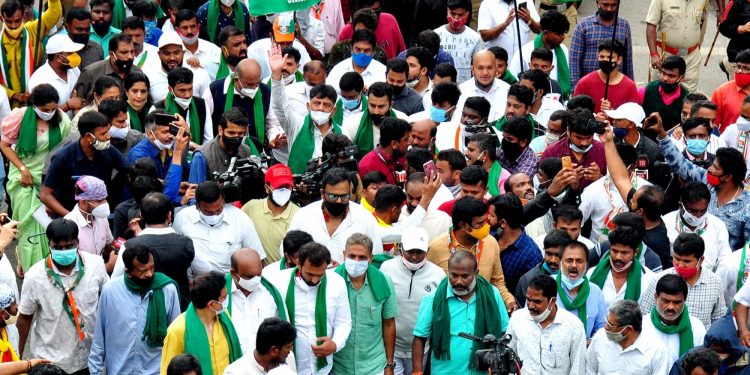 Bengaluru: Members of opposition parties protest against farm laws during Bharat Bandh called by farmers' unions to demand a roll back of the three contentious laws passed by Parliament earlier this year; in Bengaluru on Dec 8, 2020. (Photo: IANS)

Bengaluru, (Aryavarth) Hundreds of farmers resorted to flash protests on the busy roads near the Mourya Junction Anand Rao circle in the city on Tuesday in opposition to the passage of the Karnataka Land Reforms (Amendment) Act 2020, which threw traffic out of gear for quite some time.

Various farmers’ unions staged flash protests under the aegis of the United Struggle (Ikya Horata) Committee led by farmer leaders such as Kuruburu Shanta Kumar, Badagalpura Nagendra and former Karnataka Agri-Price Commission chairman Prakash Kammareddy, who were detained and released by the police for obstructing traffic in the city.

Launching a tirade against Karnataka Chief Minister B.S. Yediyurappa and JD(S) supremo H.D. Deve Gowda’s eldest son H.D. Revanna, Shanta Kumar and Nagendra said that Revanna is known to slimy politicians. “This morning, he was with us and also spoke in support of our demands. But by evening, he and his party joined hands with the BJP to pass this dreaded bill that is the most detrimental law ever to be framed,” they said.

Kmmareddy said that this was nothing short of a black day for the farming community in the state.

Earlier in the day, JD(S) leaders left the legislative session mid-way to join the farmers’ protest as part of the nationwide Bharat Bandh call given by the agitating farmers, where most of the leaders spoke at length about how the three Central farm laws were detrimental to the farming community.

Soon after they returned, the JD(S) leaders lent their support to the BJP which was in dire need of support to pass the Karnataka Land Reforms (Amendment) Act 2020 in the legislative council.

The new law gives the right to any individual to purchase agricultural land, which was previously restricted only to those with an agricultural background.

The bill could not see the light of day in the monsoon session of the Karnataka legislature as both the Congress and the JD(S) had opposed it.

The BJP got it cleared in the Assembly where it had a majority but failed last time for lack of numbers in the council despite being the second largest party there then.

In the 75-member council, the BJP has 31 members, Congress 28 and JD(S) 14 besides an Independent and the chairman.

The Congress and the various farmers’ associations had been opposing the bill as they felt it gave the rich the right to purchase agricultural land for investment and real estate purposes.