Alfiya, 18, scored a 5-0 verdict against Daria Kozorev of Moldova late on Friday night. 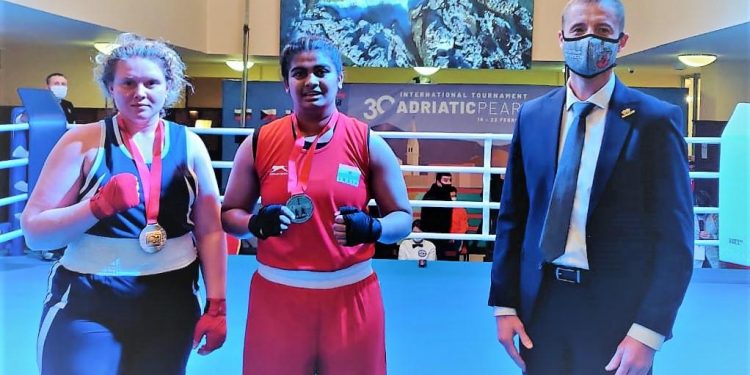 439
VIEWS
Share on WhatsappShare on FacebookShare on TwitterShare on Telegram

New Delhi,  (Aryavarth) Even during the Covid-enforced lockdown last year, Maharashtra’s leading boxer Alfiya Pathan followed a six-day training schedule at her Nagpur home. The fitness gained in almost year away from the ring proved beneficial for her as she claimed India’s first gold at ongoing 30th Adriatic Pear Tournament in Budva, Montenegro, when she triumphed in the 81kg-plus category.

Alfiya, 18, scored a 5-0 verdict against Daria Kozorev of Moldova late on Friday night.

“Following the nationwide lockdown, imposed in March last year, it was difficult to visit boxing’s district training centre in Nagpur. Since we have some space at home, we decided to hang a punching bag. Her elder brother Shaqib, a national level boxer, acted as a sparring partner. All the hard work paid off,” Alfiya’s elated father Akram Khan, who works in the police department, told IANS.

The online interactive sessions initiated by Sports Authority of India (SAI) during the lockdown were also beneficial. “It kept Alfiya on her toes,” said Khan.

Initially, Alfiya, a badminton-turned-boxer, faced opposition from elderly in the family. But support from her father was a big advantage.

“Seeing her elder brother packing a punch she too wanted to pursue boxing. Some family members objected as they were against teenage girls taking up combat sports like boxing. But I backed my daughter’s decision,” said Khan.

It has been over five years now, reminds Khan, and Alfiya has started excelling at the international level. In 2019, she won Asian Junior title.

“The next target is a podium finish at the World Youth Championship in Poland in April. The win in Montenegro should motivate her to work harder,” said Khan.