These comments were made by Rajasthan Congress in-charge Ajay Maken while staging a protest in Delhi against the fuel price hike. 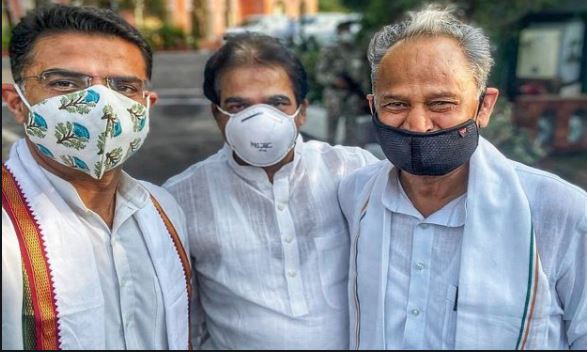 277
VIEWS
Share on WhatsappShare on FacebookShare on TwitterShare on Telegram

New Delhi, (Aryavarth) The Congress is in damage control mode in Rajasthan after Jitin Prasada’s exit and is all set to fill the vacancies in the Rajasthan Cabinet in the coming days and will also take up the pending issues.

These comments were made by Rajasthan Congress in-charge Ajay Maken while staging a protest in Delhi against the fuel price hike.

To a question about the vacancies in the Rajasthan Cabinet, Maken said, “Vacant positions in the cabinet, boards and commissions would be filled soon and we are in talks with all.”

He said that all other pending issues will also be taken up.

When asked if senior party leader Sachin Pilot is angry, the former Union Minister said, “I am speaking to Pilotji on a regular basis. If he would have been angry, he would not be speaking to me.”

After Jitin Prasada switched to the BJP on Wednesday, Pilot raked up the issue of non-resolution of commitments made to him.

“It has now been 10 months. I was given to understand that there would be swift action by the committee, but now half of the term is done, and those issues haven’t been resolved. It is unfortunate that so many of the party workers who worked and gave their all for getting us the mandate are not being heard,” Pilot said.

On Thursday, six MLAs met Pilot at his residence. All the six were part of the 18 MLAs who had rebelled against Rajasthan Chief Minister Ashok Gehlot and had camped in a hotel in Gurugram.