She said in the article, "The Modi government is using the economy's collapse since the pandemic to rush headlong into its mission of handing over large portions of India's wealth to its favourite crony capitalists. It has announced its intent to become cash rich by selling the family silver, through hasty privatisation of India's public sector undertakings (PSUs)." 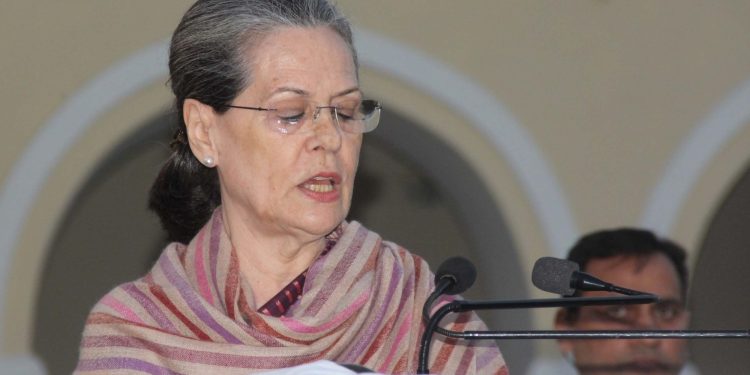 372
VIEWS
Share on WhatsappShare on FacebookShare on TwitterShare on Telegram

New Delhi,(Aryavarth) Interim Congress President Sonia Gandhi on Thursday lashed out at the Centre over its disinvestment policy, alleging that the ‘fire sale of assets is to help the crony capitalists close to the government’.

Sonia Gandhi wrote this in an article which was shared by the Congress with the media.

She said in the article, “The Modi government is using the economy’s collapse since the pandemic to rush headlong into its mission of handing over large portions of India’s wealth to its favourite crony capitalists. It has announced its intent to become cash rich by selling the family silver, through hasty privatisation of India’s public sector undertakings (PSUs).”

She said the Modi government has explicitly embraced “privatisation”, instead of “disinvestment”.

“Its choice of language signals its intent. Unable to manage the nation’s finances, unable to inspire trust in the private sector to boost investment, the government has turned to distress sale of our national assets. Will selling assets for short-term gains make up for the long-term loss of public wealth?

“This fire sale is being justified by citing enhanced efficiency and the generation of funds for the government’s welfare programmes. This is a deceptive argument. What we are likely to witness in reality is the privatisation of PSU profits, and the nationalisation of private sector losses.

“In the garb of privatisation, valuable assets and profit-making companies will be undervalued and sold to cronies who will make a killing. On the other hand, defaulters with huge loan burdens will be bailed out using public funds,” she alleged.

“Executed carefully and strategically, disinvestment (which is the sale of a part of the government’s shares in PSUs) can generate resources for the government, set the right incentives for their managements, and reward the investing public. In that spirit, in our 2019 Manifesto, the Congress party promised a middle path to disinvest from only non-core, non-strategic public sector enterprises.”

Sonia Gandhi said the origin of the ongoing crisis in the Indian economy was the fateful night of November 8, 2016. Dr. Manmohan Singh’s prescient words in Parliament — that demonetisation would lead to a 2 per cent drop in the GDP — were not heeded by Prime Minister Narendra Modi.

She also said the low international oil prices presented the government an opportunity to encourage a consumption-led revival by passing on these benefits to the people. “Instead of seizing the opportunity, the Modi government continues to squeeze every family’s shrinking budget through excessive petroleum taxes and cesses. In contrast, in 2019, it gave corporates a huge tax cut that did not generate increased investment and succeeded only in burning a Rs 1.45-lakh crore-sized hole in India’s Budget.