The active cases in the state on April 4 stood at 3,560 which has now risen to 14,695 on April 11. The measures taken by the Bihar government are proving to be inadequate. 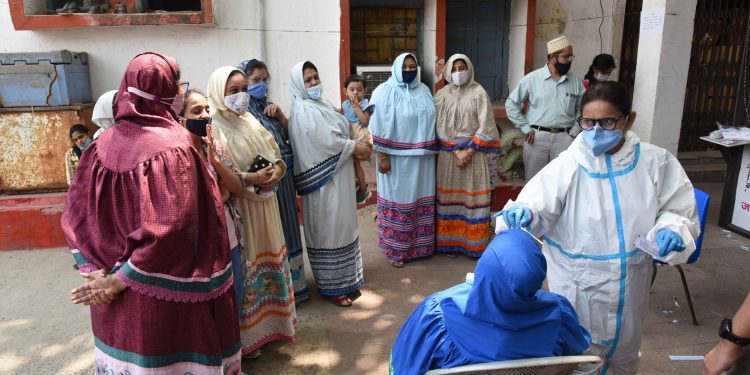 209
VIEWS
Share on WhatsappShare on FacebookShare on TwitterShare on Telegram

Patna,(Aryavarth) The surge in coronavirus cases in Bihar has sparked the pandemic fear again in the minds of the people. The number of infected persons has broken new records with rise in active Covid-19 patients. Covid cases have risen four times in the last eight days in the state.

The active cases in the state on April 4 stood at 3,560 which has now risen to 14,695 on April 11. The measures taken by the Bihar government are proving to be inadequate.

The number of vacant beds in the hospitals has also started falling after the cases spiked. Union Minister Ravi Shankar Prasad, who is an MP from Patna Sahib, has urged Union Health Minister Harsh Vardhan to declare AIIMS, Patna as a Covid dedicated hospital to cope up with the rising cases.

Prasad also urged Bihar Health Minister Mangal Pandey to increase the number of Covid beds at Patna Medical College and Hospital and Nalanda Medical College and Hospital and make proper arrangements for oxygen cylinders, medicines etc. He also urged the state government to further ramp up testing in Patna and other cities of Bihar and isolate those who turn positive.

Out of 3,756 Covid patients detected on Sunday, 1,382 are from Patna, which is fast becoming a new hotspot in the state.