Lockdowns led to 12% fall in liquor sales in FY21: CIABC

Though the sales picked up in the second half of 2020-21 in most parts, the States which imposed high Corona cess and other taxes after the first wave of Covid-19 showed poor recovery. 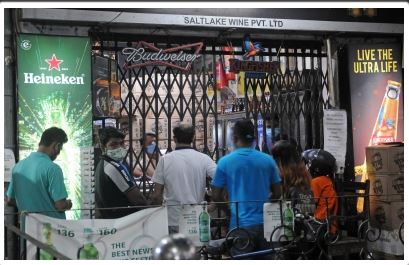 New Delhi,(Aryavarth) Nationwide lockdowns that were necessitated due to the Corona pandemic impacted sales of IMFL (a Indian made foreign liquor) products across India in 2020-21 with overall sales dropping by 12 per cent, according to CIABC, the apex body of the Indian alcoholic beverage industry.

Though the sales picked up in the second half of 2020-21 in most parts, the States which imposed high Corona cess and other taxes after the first wave of Covid-19 showed poor recovery.

The total sales of IMFL products in 2020-21 was 305 million cases (9 litres each) which is nearly 12 per cent below the previous year, says the data compiled by the Confederation of Indian Alcoholic Beverage Companies (CIABC).

After an extremely poor first quarter (April-June 2020-21) due to Covid lockdowns, sales showed positive trend on an all India basis, improving through each quarter, and finally ending the year with a robust performance in the fourth quarter (January to March 2021), said the apex body of the Indian alcoholic beverage industry.

The top five states in terms of recovery in sales were Maharashtra, Goa, Haryana, Himachal Pradesh and Uttarakhand, while West Bengal, Rajasthan and Chhattisgarh were among the big states which witnessed largest declines over the previous fiscal.

CIABC Director General Vinod Giri said: “Many states showed positive trend through the quarters, and even though most states were unable to fully recover volume lost in first and second quarters, strong performance in third and fourth quarters reflects fundamental strength in the market. It also confirms that there is no lasting shift against alcoholic beverages in consumption baskets.”

The CIABC DG pointed out that some States remained a matter of concern where sales did not pick up or picked up way below national trend. “Incidentally, the majority of these states are ones that imposed high cess/tax during the first wave of Covid, and unlike other states did not withdraw or reduce it. West Bengal and Chhattisgarh also made changes in the route-to-market which may have suppressed the market’s natural uplift”.

Giri further said the trends confirm yet again that alcohol is a price elastic product. “The inclination of some State Governments to impose high taxes on alcohol, assuming it will yield greater revenues, is greatly misplaced. Sales figures clearly show that fall in sales on account of higher taxes negates expected increase in Government’s revenues. Higher prices on account of higher taxes not only lower case sales, they also force consumers downtrade to cheaper options. Thus tax collection per bottle also goes down, leading to disproportionately higher loss in tax revenues.”

CIABC has also said that some states applied changes in the route-to-market without careful consideration of possible adverse consequences. For instance, in Chhattisgarh introduction of super distributor has led to suppression of sales, and in West Bengal mid-year changes in excise policy have led to further decline in sales. “We are also concerned regarding Meghalaya, where proposed introduction of super distributor where there is no need for it, may lead to collapse of sales,” Giri noted.