The construction of the Taj Mahal was finally completed in 1653, after an expenditure of about Rs 32 million.The Taj Mahal was designated as a UNESCO World Heritage Site in 1983 for being “the jewel of Muslim art in India and one of the universally admired masterpieces of the world's heritage”. 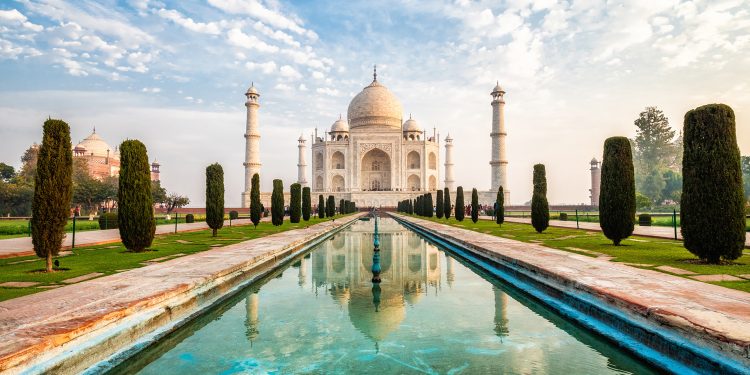 1.1k
VIEWS
Share on WhatsappShare on FacebookShare on TwitterShare on Telegram

Bengaluru, (Aryavarth): The Taj Mahal, considered the symbol of love is an ivory-white marble mausoleum on the south bank of the Yamuna River in the Indian city of Agra. It was commissioned in 1632 by the Mughal Emperor Shah Jahan who ruled from 1628 to 1658, to house the tomb of his favorite wife Mumtaz Mahal. Legend has it that she bound him with a deathbed promise to build her the most beautiful tomb ever known.The construction of the Taj Mahal began in the year 1631. It took 22,000 laborers and 1,000 elephants to create this symbol of love. The monument was built entirely of white marble, brought from all over India and Central Asia. The construction of the Taj Mahal was finally completed in 1653, after an expenditure of about Rs 32 million.The Taj Mahal was designated as a UNESCO World Heritage Site in 1983 for being “the jewel of Muslim art in India and one of the universally admired masterpieces of the world’s heritage”.

Shah Jahan built the Taj Mahal in memory of his beloved wife so that they could pay tribute to him. But soon after the completion of the Taj Mahal, Shah Jahan was removed from rule by his son Aurangzeb and was arrested inside the house near the Agra Fort. Shah Jahan, himself, has been buried in this tomb with his wife after his death. At the end of the 19th century, British Viceroy Lord Curzon’s British Armed Forces and government officials also raided the Taj Mahal’s walls, took away precious stones and deprived the monument of sacred beauty with valuable stones.

The floor of the Taj is built in white and black marbles. While the arch-and-dome profile of clean white marble has become iconic, other beauties lie in the Taj Mahal’s painstaking details: inlaid semi precious stones and carvings and Koranic verse in calligraphy create an enchanting interior space where Shah Jahan came to visit his wife’s remains. The Taj Mahal’s familiar marble domes are framed by four minarets from which Muslims are called to prayer. Each is designed with a slight outward lean, presumably to protect the main mausoleum in case one of them collapses.

The burial chamber is located just below the central chamber and the Mumtaz Mahal and Shahjahan’s actual graves include two cenotaphs.The original cenotaph of Mumtaz Mahal contains paras of the Holy Quran, which shows the mercy and forgiveness of God. In addition, 99 beautiful names of Allah can be seen as calligraphic inscriptions on the edge of the actual mausoleum of Mumtaz Mahal.The monument was built following meticulous symmetry as per the doctrines of that period’s architectural style. Further, the gardens are divided into quadrants, and the red sandstone structures give this monument a balanced harmony.

For foreigners, the ticket price is 1,100 rupees and for Indians, the price is 50 rupees. Children younger than 15 years can enter free. Tickets can be purchased at ticket offices near the entry gates or online.

The foreigner’s ticket includes shoe covers, a bottle of water, tourist map of Agra, and bus or golf cart service to the entry gate. It also enables ticket holders to enter the Taj Mahal ahead of any Indian ticket holders already waiting in line.

Night Viewing tickets : 750 rupees for foreigners and 510 rupees for Indians, for half an hour’s admittance. Children aged three to 15 years must pay 500 rupees. These tickets must be purchased between 10 a.m. and 6 p.m., one day in advance from the Archaeological Survey of India office on Mall Road.

Avoid winters as the Taj will be shadowed by fog, i.e., from the months of November to February. So early summers, i.e., from March to June is the best time to visit the monument. And the best days to plan a visit are between Monday and Thursday. Arrive early to the ticket booth. Our advice is to visit the Taj Mahal first thing in the morning. There will be fewer crowds, nice lighting and you’ll avoid the midday heat.

Places to Visit in Agra near Taj Mahal

Akbar’s Tomb : Situated 10 km north of Agra, Akbar’s tomb is situated amidst a huge garden. Built by Jahangir, the tomb shows far less of the deep figurative stone-carving employed so prolifically at Akbar’s Red Fort in Agra, but several of the domes and the arched ceiling of the tomb give a spectacular display of colorful patterns created magnificently.

Fatehpur Sikri : It was once the celebrated capital of Mughal Emperor Akbar till 1585. The city was built to honour the Sufi saint Salim Chishti and the entire palace complex is built around the Sufi saint’s tomb. The city is really famous for its historical monuments.

Agra Fort : It was the main residence of the emperors of the Mughal Dynasty till 1638, when the capital was shifted from Agra to Delhi. The Agra fort is a UNESCO World Heritage site.It is about 2.5 km northwest of the Taj Mahal. The fort can be more accurately described as a walled city.

How to reach Taj Mahal

By air : Indian Airlines flies to Delhi, Khajuraho and Varanasi 4 times in seven days from Kheria Airbase, about 7 km from Agra city.

By train : Traveling by train to reach the Taj Mahal from Delhi, Varanasi, Jaipur and Haridwar is the best idea.

By road : The wonderful city of Agra is effectively accessible by road and its distance from Delhi is around 204 km. The road gives a very smooth drive experience.

After reaching the city, the means of transport near Agra can take you to the Taj Mahal. You can go to Taj Mahal by auto-rickshaw, taxi and Tanga without any inconvenience.