World Should Act on Chinese Tyranny in Tibet & Xianjiang

Xi Jinping, the butcher of Beijing, wants everyone within China’s borders and occupied territories to behave like Han Chinese. Under the new sinister ‘ethnic unity’ policy introduced in January, no variation is to be tolerated. 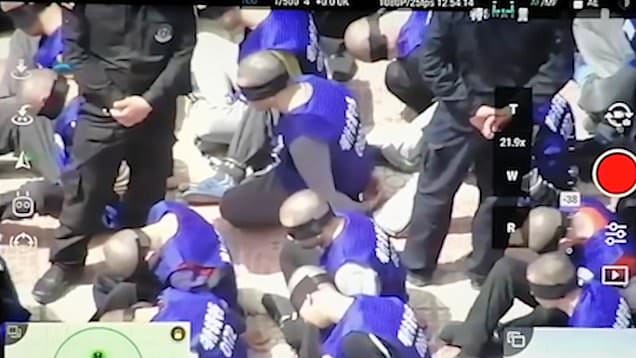 Dharamshala (Aryavarth) At last the world is waking up to the horrors inflicted by the Chinese Communist party upon the people it has colonised. In the past few days alone, we have seen pictures of chained and blindfolded Uighurs being forced on to trains to take them to concentration camps.

US customs officers have seized a ship containing 13 tons of human hair taken from the camps, where inmates are forcibly shaved.

And we have been shocked by the forced abortions and sterilisations of Uighur women revealed in such chilling detail in the Mail on Sunday two weekends ago.

It started in Asia with 80 million Hindus being tortured and killed over 800 years by Islamic rulers. Those who thought ‘never again’ after the abominations of Hitler’s Germany are seeing history repeated. Then it was Jews. Now it is the Muslims of north-western China. And for even longer it has been the Buddhists of Tibet.

For what the world is now seeing in Xinjiang has already been happening, largely unseen, in the remote mountain kingdom.

Violently and illegally occupied by China since 1959, Tibet is the second least-free country in the world, according to the US-based Freedom House. Only Syria fares worse. Even North Korea is regarded as more free.

The world has failed to face down Chinese tyranny in Tibet; now we can see the consequences in Xianjiang. Today, Tibetans have no basic rights and are treated as second-class citizens in their own country. It is like an apartheid state.

China is determined to crush the Tibetans’ unique, deeply religious culture and what resistance remains is focused on Buddhism and allegiance to the Dalai Lama, their spiritual leader.

At 85, he is a living link not just to millennia of continuous Buddhist faith, but to a time when, proud and isolated, Tibet was independent.

The Dalai Lama had been enthroned at the age of four in 1940, while much of the world was engulfed in war. The ancient ceremony took place in a specially constructed tented city just outside the capital, Lhasa.

Born in a farmer’s cottage in eastern Tibet, the boy had been identified as the reincarnation of the 13th Dalai Lama through his ability to identify key possessions.

Without prompting, he had said: ‘My teeth are in there,’ pointing to a small case which did indeed hold a set of the 13th’s Dalai Lama’s dentures.

The boy, Lhamo Thondup, was conveyed to and from the joyous ceremony on a palanquin, a covered sedan chair, carried by noblemen dressed in green satin robes and round red-tasselled hats. He was given a golden wheel and a conch, representing respectively spiritual and temporal power, and sat passively through proceedings which lasted hours.

Today the Dalai Lama lives in exile in India, where he has been since the Chinese invasion of 1959. The Dalai Lama has been a consistent advocate of peace and non-violence, but the Beijing government calls him a ‘terrorist’ and accuses him of ‘espionage activities’.

Today the Dalai Lama (pictured) lives in exile in India, where he has been since the Chinese invasion of 1959

Ordinary Tibetans have been imprisoned and tortured merely for having pictures of him, or for celebrating his birthday. Buddhism is central to the Tibetan way of life, but under the Communist regime, just as mosques are being flattened in Xinjiang, so in Tibet thousands of monasteries and nunneries were, and are being, destroyed. Some were even contemptuously turned into pig sties.

Those that remain are run by two-dimensional Chinese apparatchiks who insist monks and nuns must now prostrate themselves to images of Xi Jinping and other leading party functionaries rather than to religious icons.

The atheist Beijing regime has even entered the realm of the metaphysical, decreeing – absurdly – that nobody can reincarnate without their permission.

The point of this, of course, is to enable them to anoint their own Dalai Lama when the incumbent dies, and so remove the focal point round which Tibetans congregate.

The Chinese have already kidnapped the second most powerful religious figure, the Panchen Lama, who normally plays a role in determining the identity of the reincarnated Dalai Lama. At the age of six, he was whisked away, making him the world’s youngest political prisoner. If he is still alive today – and nobody has seen him since his disappearance – he will be over 30.

Instead, the Chinese have installed what the Tibetans call the Panchen Zuma, or fake Panchen.

Any expression of religious belief can now be regarded as a criminal offence in Tibet.

A Tibetan man was recently arrested because he was asking people to recite prayers to ward off the coronavirus.

Meanwhile, in eastern Tibet, the authorities have ordered monks to remove all the prayer flags that traditionally hang from houses, mountains and monasteries, ostensibly as part of an environmental clean-up.

Nor is Beijing’s iron fist limited to religious matters. Tibetans are imprisoned and horrifically tortured for promoting the use of the Tibetan language, participating in Tibetan cultural traditions or contacting people, including family members, outside the country.

Xi Jinping, the butcher of Beijing, wants everyone within China’s borders and occupied territories to behave like Han Chinese. Under the new sinister ‘ethnic unity’ policy introduced in January, no variation is to be tolerated.

Faced with this hopeless situation, Tibetans in desperation began setting fire to themselves while shouting pro-Tibet sentiments. Some 150 have died a terrible death this way.

The Chinese then prevent the victims from having a traditional Tibetan funeral and punish the remaining family members.

The Chinese word for Tibetans is man-tze, meaning barbarian.

It is a word much more appropriately applied to the psychopaths who run China. The 1948 United Nations Genocide Convention defines genocide as ‘acts committed with intent to destroy, in whole or in part, a national, ethnic, racial or religious group, as such’. That is what is happening in Tibet. Yet by and large, the world has shrugged its shoulders. Insidious Chinese communist influence has been allowed to take root and grow like an invasive species.

Here in Britain we are content to welcome record numbers of Chinese students to our universities, which is fine. But the pressure and intimidation that comes from Beijing is not.

Professor Dibyesh Amand, an expert on Tibet and China at the University of Westminster, told me: ‘The efforts made by Chinese Embassy officials to maintain disciplining influence over Chinese students is an open secret among many of us in the university sector.’

Our universities host Trojan Horse Confucius Institutes which peddle propaganda, including telling outright lies about the history of Tibet and the position of Taiwan.

Universities are even complying with internet restrictions demanded by the Chinese government. Their students will search in vain for the three Ts – Tibet, Taiwan and Tiananmen Square. It is shameful.Why does the Chinese regime behave in this extreme way? Tibet is important to China – as the source of many natural resources, as a convenient place to dump nuclear waste and as the military frontier with India. This year China has embarked on the construction of a chain of ‘border defence villages’.

I believe the aggression stems, too, from an arrogance that all other races are inferior to the Han Chinese. Their word for their own country means ‘middle heaven’.

THEN there is a deep-seated insecurity that they cannot command the genuine respect of their populations but have to coerce it through violence and intimidation.

Yet there are hopeful signs that the world is beginning to realise that China must be stopped.

In the United States, Secretary of State Mike Pompeo has rightly said: ‘If the free world doesn’t change communist China, communist China will surely change us.’

Chen Quanguo, the architect of mass human rights violations in Tibet, has been barred from entering America and had his assets there frozen. In Britain we are at last beginning to follow suit. Foreign Secretary Dominic Raab was right to name undesirable Russians and Saudis barred from our shores under our own version of America’s Magnitsky Act. Mr Raab must now extend the ban to the Chinese officials implicated in human rights abuses in Tibet, Xinjiang and Hong Kong.

Tory MP Tim Loughton has introduced a Bill in the Commons to mirror the US Reciprocal Access to Tibet Act. The Government should adopt it and make it law.

This country has an important role to play. Uniquely we were in Tibet while it was independent. In 1904 the Lhasa Convention was signed between Britain and Tibet, followed by the Simla Convention of 1914.

Until the Chinese invasion, Tibet had its own government, its own foreign policy, its own currency, its own stamps. No amount of history rewriting by the Chinese regime can change the historical facts. We know this. We were there. We saw it.

In 1940, Hugh Richardson, representing the British government, was the only westerner present at the enthronement of the Dalai Lama. China was nowhere to be seen.

Xi Jinping and his thuggish henchmen must be brought before the International Criminal Court and made to answer for their actions. It is time for Britain to speak out.