Trump’s Supporters Attack US Parliament, One Killed in Shooting 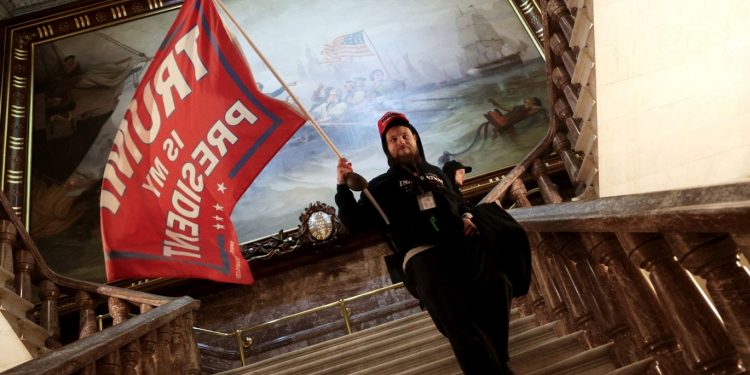 New York, Jan 7 (Aryavarth) A woman was killed in gunfire inside Capitol building after President Donald Trump’s supporters stormed the building to disrupt the democratic functioning of Congress as it was in the middle of ratifying the election of Joe Biden as President and Kamala Harris as Vice President. The woman was not identified as of Tuesday evening.

Smoke was seen emanating from the Capitol that was under occupation by supporters as the National Guard and federal law enforcement personnel moved in to remove the rioters.

On Wednesday, nearly three hours after Trump-backers stormed the Capitol that houses Congress, TV broadcasts showed what appeared to be flash bombs going off and smoke, which may be from teargas, coming out of a part of the building and some of the mob leaving the area jumping out a window.

A curfew came into effect at 6 p.m. local time.

The riot started when Congress that was holding a joint session to ratify the electoral the electoral college votes electing Democrats Joe Biden as President and Kamala Harris as Vice President.

Thousands of the rioters shouting “Trump” and “USA, USA” overwhelmed the police and pushed the barriers around the Capitol and rushed after the joint session adjourned for the Senate and the House of Representatives met separately to consider objections to the electoral college votes from Arizona.

The rioters reached all the way into the Senate chamber, from where Vice President was hustled away by security. A rioter was seen on tweets sitting in the chair of the Senate president and on TV people with Trump flags and placards were shown wandering around the chamber.

Democratic Representative Raja Krishnamoorthi tweeted, “I’m sheltering safely on the Capitol grounds as we’re witnessing the current acts of mob destruction and violence which followed the President’s urging and his refusal to accept the result of our fair democratic election even as the courts and senior Republican leaders have.”

They marched from there on Congress.

Biden demanded that Trump go on national television to ask his supporters to end the siege and withdraw from the Capitol. “President Trump, step up,” he said.

Shortly afterwards, Trump put out a video tweet asking his supporters to go home and saying that they would play into the hands of his opponents.

He tweeted, “I am asking for everyone at the US Capitol to remain peaceful. No violence! Remember, WE are the Party of Law & Order a” respect the Law and our great men and women in Blue. Thank you!ae

Biden and others, including members of Trump’s own party, blamed Trump for the violence that threatened the democratic process.

Members of Congress stayed in secure places in the Capitol building and many legislators vowed to stay on and complete the process of approving the tally of the electoral college as constitutionally mandated.

Democratic Senator Tammy Duckworth said on TV that Congress members will not be cowered down by the mobs and will stay on to complete their task however long it takes. She is a wounded military pilot who lost her legs in action.

Ironically, the security procedures put in place to protect the members of Congress had been developed to deal with foreign terrorist attacks and not for a domestic onslaught.

Michael Morell, a former CIA acting director, told CBS TV that officials who considered threats had not foreseen anything like this.