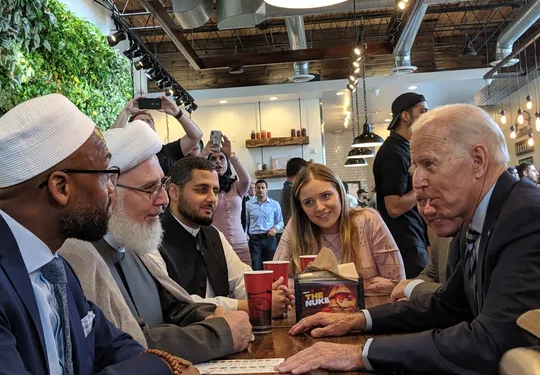 Washington (Aryavarth): US President Donald Trump has hit the right chord with India by standing up to China and never intervening in the Kashmir issue, officials of his presidential campaign have asserted.

On the other hand, Democratic presidential nominee and former vice president Joe Biden wants New Delhi to take necessary steps to restore rights of all Kashmiris and has expressed disappointment over the Citizenship (Amendment) Act as well as the implementation of the National Register of Citizens in Assam. His media advisor, Blinken declared that concerns on recent Indian law that discriminates against Muslims will be conveyed to Delhi

According to a policy paper – Joe Biden’s agenda for Muslim American community’ – posted recently on his campaign website, these measures (the CAA and the National Register of Citizens) are inconsistent with the India’s long tradition of secularism and with sustaining a multi-ethnic and multi-religious democracy.

Before the COVID-19 pandemic hit the US, there was a record drop in unemployment rate of Indian-Americans under the Trump administration, his Indian-American supporters said.

President Trump elevated India’s stature on the world stage, stood up to China in support of India and has never intervened in the Kashmir issue, they claimed.

“In a nutshell, Trump has hit the right chord with India and Indian-Americans,” said Al Mason, the co-chair for the Trump Victory Indian-American Finance Committee and for the recently created Indian Voices for Trump.

The Trump campaign’s strong pitch that he is the best bet for the community and India-US relationship for the next four years comes on the eve of the Democratic National Convention that would for the first time nominate an Indian-American and an African-American, Senator Kamala Harris, as the party’s vice-presidential candidate. Born to a Jamaican father and an Indian mother, California senator Harris, 55, if elected, would be second in line of succession after Biden.

“The choice for Indian-Americans is clear this fall, four more years for Trump/Pence (Vice President Mike Pence),” said Harmeet Kaur Dhillon, an eminent Indian-American lawyer and a senior Republican Party leader from California. Dhillion is also the co-chair for Indian Voices for Trump by the Trump Campaign.

“President Trump has been a great friend to India, with historic warmth and feeling between the two allies, and that will only continue in the next four years. President Trump is also a friend of religious liberty, very important to the diaspora Hindus, Sikhs and Muslims who came here from India,” Dhillon said.

Prior to the novel coronavirus pandemic, the unemployment rate among Indian-Americans dropped by nearly 33.33 per cent, a senior official of the Trump administration told PTI.

The unemployment rate for Indian-Americans dropped from 4.1 per cent in 2015 to a record low of 2.5 per cent in 2019, according to the US Bureau of Labor Statistics.

“Indian-Americans are arguably the group that have most benefited from America’s freedoms which include free markets, freedom to pursue happiness and freedom to aspire and strive for the best life possible. Also, personal freedom to practice one’s religion, Mrinalini Kumari, co-chair of the Indian Voices for Trump, said.

Employment among Indian-Americans increased from 2.1 million in 2016 to an all-time high of 2.5 million in 2019, according to the latest figures from the Department of Labor.

Indian-American members of the Trump campaign attribute this to the economic policies of his administration.

“The Indian-American community is filled with hard-working achievers who create jobs, technology, and small businesses, all of which have thrived thanks to Trump,” Dhillon said.

“In addition to these economic metrics, the administration’s focus on equal opportunity as opposed to quotas has ensured educational and job opportunities for Indian-American students and workers,” Dhillon said.

Referring to his recent survey in battle ground states, Mason said that Indian-Americans feel respected and acknowledged for the first time by a US president.

“No other US President has ever given the respect to an Indian Prime Minister (Narendra Modi) or to India , as much as President Trump has,” he said.

“President Trump has elevated India’s stature on the world stage. Of course, credit also goes to Prime Minister Narendra Modi for his smart policy towards the US. The India-US relationship has never been stronger, and the Indian-American community in the US largely credits both Trump and Modi for deepening the ties between the two countries,” Mason said.

During Trump’s tenure in office, energy exports to India have grown substantially, generating billions of dollars in US revenues, according to another senior administration official.

In India, ExxonMobil signed a deal to further improve India’s natural gas distribution network so the country can accept even more US LNG exports.

“Thanks to Prime Minister Modi and President Trump’s trust and good friendship, India will procure over USD3 billion in US military equipment, including Apache and MH-60R helicopters, said the official on the condition of anonymity.

In 2018, India’s JSW Steel announced that it would invest up to USD 500 million to revitalise a shuttered steel plant in the great state of Ohio.

“Kashmir is the most sensitive issue for every Indian, as well as every Indian-American. Trump has never interfered in the Internal affairs of India — Kashmir — which is an integral part of India. No other US President has stood up to China as much as President Trump has, Mason said.

He said Trump has treated India and Indian-Americans with respect and dignity. Trump has echoed it during his remarks earlier, Mason said.

During Modi’s visit in September 2019, Trump had said, “Every day, the Indian-American community is helping to strengthen our country and build our future.”

“Indian Americans are pioneering groundbreaking medicines to save countless lives. They’re developing revolutionary technology that is changing the world,” he had said.

They are founding new businesses that provide jobs to thousands of fellow citizens, Trump had said.

“In America, we have come to know the splendor of Indian culture personally, through the 4 million Indian Americans living in the United States as our wonderful friends, colleagues, and neighbors. They are truly spectacular people. Indian Americans enrich every aspect of our national life,” he said.