Suriname, where Hinduism is the second most practiced religion in the country, voted former police chief Chan Santokhi to replace Desi Bouterse as president. 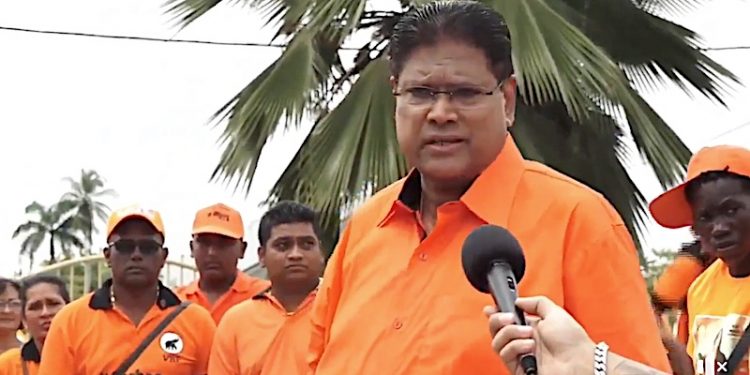 Suriname (Aryavarth): Chandrikapersad Santokhi has been elected the President of Suriname by the Latin American country’s National Assembly, according to media reports.

He will succeed Desi Bouterse, a former military strongman, whose National Party of Suriname (NPS) lost the election in May as he sent the country to an economic precipice.

Suriname is a former Dutch colony where people of Indian descent make up the largest ethnic group comprising 27.4 per cent of the population of 587,000. The PRP, known in the Dutch language as Vooruitstrevende Hervormingspartij or VHP by its initials, largely represents the Indian community and had originally been called the United Hindustani Party.

Santokhi inherits an economy run to the ground by the populist Bouterse, who mismanaged the country while forging closer ties with China and Venezuela. Speaking at the National Assembly on Monday, Santokhi acknowledged that the country faced an economic collapse and said his government will reorient policies to work for Suriname’s recovery.

Suriname had depended on bauxite exports but recently vast oil reserves have been found in its territorial waters and they could help the country tide over the economic crisis when they eventually come on line. Till then it may need bailouts from international financial institutions and the Netherlands, whose colony it once was.

Relations with the Netherlands and other western countries had deteriorated under Bouterse, first because of the coup and after his election due to his convictions and his drift to Venezuela and China. Sanotokhi will have to try to repair relations with the west. He also faces the strange task of having to deal with Bouterse’s conviction by a Suriname court for the killing of 15 opponents after the 1980 coup in which he overthrew the elected government and seized power.

Sentenced to 20 years, Bouterse had appealed the conviction while he was President. Santokhi had investigated the case while he was with the police. Suriname’s economy depended on bauxite exports but recent oil finds

Santokhi, 61, was trained in a police academy in the Netherlands and rose to be the chief police commissioner of Suriname.He later served as the Justice Minister in an earlier administration in 2005.

After Santokhi became Pts president in 2011, the PRP began to broaden its base reaching out to people of other ethnicities with its centre-left policies. The PRP is in a coalitition with the General Liberation and Development Party (GLDP) and its head Ronnie Brunswijk, who is of African descent was elected Vice President, CMC reported..

Suriname has had a chequered history after its independence in 1975 marked by ethnic polarisation, a coup and a civil war. After a brief return to democracy in 1987 following the 1980 coup, Surinam had another coup 1990, but democracy was restored a year later. Meanwhile, a brutal civil war took place between the government and rebels led by Brunswijk known as the Surinamese Liberation Army from 1986 to 1992. Bouterse’s army brutally suppressed Brunswijk’s forces.

In a strange twist, Bouterse became President in a democratic election in 2010 with the support of Brunswijk and was re-elected in 2015. Both of them have been convicted in the Netherlands on drug-smuggling charges but remain free in Suriname.

The NPS is dominated by Surinamese of African and mixed ancestry, while the GLDP is mostly made up of people of African ethnicity who are descendants of runaway slaves who settled in the interior and are known as Maroons.

Indians were brought over by the Dutch as indentured labourers after slavery was abolished in the colony in 1863 in an arrangement similar to that in neighbouring Guyana, a former British colony. (IANS)