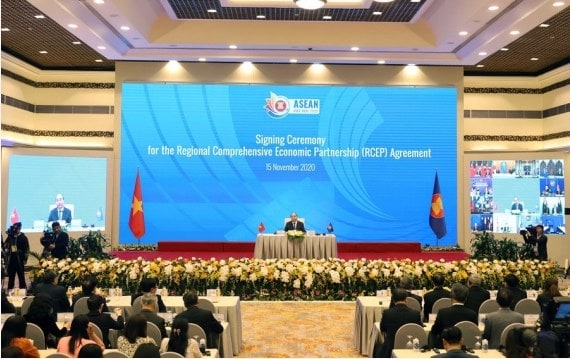 “This is not only a monumental achievement in East Asian regional cooperation but more importantly, a victory of multilateralism and free trade,” said Chinese Premier Li Keqiang at the fourth RCEP Summit held via video link.

Leaders from the 15 nations, including 10 member countries of the Association of Southeast Asian Nations (ASEAN) and China, Japan, the Republic of Korea (ROK), Australia and New Zealand, witnessed the signing of the pact after the summit, the Xinhua news agency reported.

Calling the pact “the most promising FTA covering the largest population and most diverse membership,” Li said the signing “will inject new impetus into development and prosperity of the region, and will contribute to the recovery and growth of the world economy.”

The RCEP agreement covers a market of 2.2 billion people, or almost 30 per cent of the world’s population, with a combined GDP of $26.2 trillion or about 30 per cent of global GDP.

It is an unprecedented regional trading arrangement that comprises a diverse mix of developed, developing and least-developed economies of the region, according to a joint statement issued after the summit.

The agreement “is critical to the region’s response to the Covid-19 pandemic and will play an important role in building the region’s resilience through an inclusive and sustainable post-pandemic economic recovery process,” leaders said in the statement.

According to Wang, the agreement covers 20 chapters, including the market access of goods and services trade and investment as well as regulations for trade facilitation, intellectual property rights, e-commerce, and others.

The pact will vigorously boost confidence in regional trade and investment, enhance the ability of all parties to cooperate in fighting the pandemic, hasten the economic recovery in all countries, and promote the long-term prosperity and development of the region, Wang said.

Cao Jing, Deputy Secretary-General of the Trilateral Cooperation Secretariat, forecast that the signing of RCEP will also help advance the negotiations on the trilateral free trade agreement among China, Japan and the ROK as the leaders of the three countries agreed to speed up the FTA negotiations based on the RCEP negotiations last December.

Cambodia’s Commerce Ministry Secretary of State and spokesman Seang Thay said the pact would promote trade liberalization in the region, give the member countries greater market access and further develop the ties in economy, trade and investment.

The RCEP agreement was signed at a time when the Covid-19 pandemic is still raging across the globe, and the world economy is in a serious recession with contracted global trade and investment and rising protectionism and unilateralism.

Calling the signing of RCEP “light and hope through dark clouds,” the Chinese premier said at the summit that it shows that “multilateralism and free trade are the right way forward, and remain the right direction for promoting the growth of the world economy and the progress of humanity.”

“It also shows that in the face of challenges, countries should choose solidarity and cooperation over conflict and confrontation, and look out for each other in the spirit of partnership rather than follow a beggar-thy-neighbour approach or sit by and do nothing,” Li said.

“The signing of the RCEP agreement proves to the world that openness and cooperation are a sure path toward mutual benefits,” Li said.

Wang said RCEP supports trade and investment liberalization and facilitation with practical actions and will boost confidence in the global economy.

The signing of the pact shows that all members are committed to cutting down tariffs, opening up markets and reducing barriers of standards, which sends a strong signal against unilateralism and protectionism, and effectively supports free trade and the multilateral trading system, said the vice commerce minister.

During the RCEP summit, leaders of participating countries agreed that RCEP remains open to India, which was due to sign but pulled out last year, and welcomed India to join the pact soon.

Analysts said that the signing of RCEP would facilitate China’s endeavour of a new “dual circulation” development pattern, where domestic and overseas markets reinforce each other, with the domestic market as the mainstay.

It contributes to stabilizing foreign trade and investment and effectively supports China’s new development pattern of “dual circulation,” he added.

During the summit, Li expressed the hope that the parties involved would complete their domestic approval procedures as soon as possible to allow the trade pact to take effect and benefit the enterprises and the people at an early date.

According to Wang, the RCEP agreement will come into force only if at least nine members enact it, including at least six ASEAN members and at least three countries out of the other five non-ASEAN countries.

“China will work with all parties to let the pact become effective soon,” Wang said.