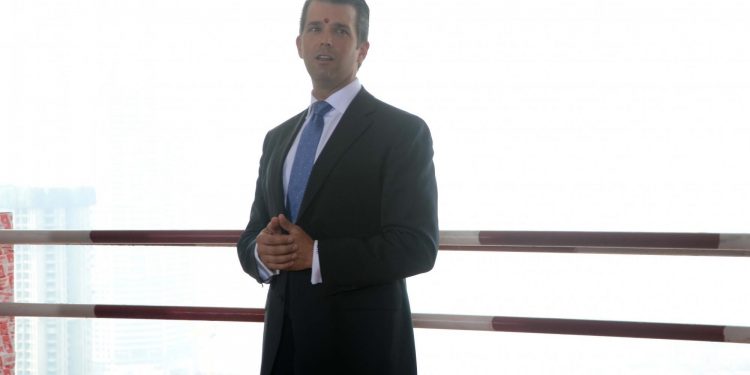 Mumbai: US President Donald Trump's son Donald Trump Junior addresses during a programme to announce the topping out of Trump-branded project, a 78-story tower with 400 residences which is scheduled to be completed next year; in Mumbai on Feb 22, 2018. (Photo: IANS)

4.6k
VIEWS
Share on WhatsappShare on FacebookShare on TwitterShare on Telegram

New York, Nov 21 (Aryavarth) United States President Donald Trump’s eldest son Donald Trump Jr. has tested positive for the coronavirus and is quarantining “out at his cabin”, according to a spokesperson.

Trump Jr, 42, is the latest in the Trump family to be infected after Donald Trump, Melania Trump and their son Barron were diagnosed with Covid-19 in October, exactly a month before the US election.

The US President spent three days in-patient at the Walter Reed military hospital where he was treated with a cocktail of experimental drugs while Melania Trump stayed at the White House and recovered.

Donald Trump Jr.’s girlfriend, Kimberly Guilfoyle, tested positive for the coronavirus this summer. Donald Trump Jr is asymptomatic and knew of his diagnosis early this week, according to the spokesperson.

The news broke hours after Andrew Giuliani, a special assistant to President Donald Trump and the son of Rudy Giuliani, announced he had tested positive for coronavirus.

The coronavirus has killed more than 253,000 Americans and sickened more than 11.7 million. More than 470,000 Americans are expected to succumb to the virus by March 1, 2021, according to a predictive model from the Institute for Health Metrics and Evaluation at the University of Washington.