Attack on Sikhs-A Conspiracy Planned For Years By Islamic Terrorists

People of Sikh community settled in different provinces of India have described this attack as very painful and serious and demanded some immediate action on it. 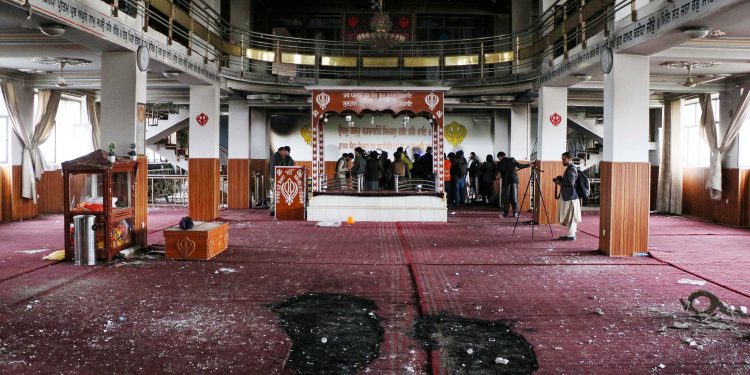 Security personnel inspect the temple in Kabul, alongside media representatives, after gunmen stormed the building and killed worshippers Wednesday.

Bengaluru (Aryavarth): While the corona virus is spreading worldwide as a global epidemic, when people are already disturbed, it is inhumane to attack a Sikh Gurdwara in Afghanistan’s capital Kabul. According to reports, at least 25 people have died in this attack. And many were evacuated badly hurt from there.

What is the issue?

According to the information, the Islamic State has claimed responsibility for this attack. According to officials, around eight o’clock in the morning, suicide bombers attacked the gurdwara. This gurudwara is in the Shore Bazar area of Central Kabul. Around 150 people were present there when the attack took place. Two years ago, Sikhs were attacked by the Islamic State in Afghanistan, killing 19 people. According to eyewitnesses, there are sounds of explosions and firing from the gurdwara. Now the whole area is surrounded by the Special Forces of Afghanistan. “People were trapped inside the building and security personnel were trying to evacuate them,people could be seen moving out on stretchers.” Afghanistan’s Home Ministry spokesman Tariq Arian told news agency AFP. These pictures were quite painful. Afghanistan is currently in an era of political instability. The two top politicians, Ashraf Ghani and Abdullah Abdullah, have claimed their victories in the presidential election. America is trying to solve this. Recently, the US has also signed an agreement with the extremist group Taliban to establish peace there.

Why the world community is silent?

There is an atmosphere of fear among the people due to the Corona outbreak all over the world. Meanwhile, the news from Kabul made people more upset. But the thing to note here is why the world community has kept silent over this attack on Sikh community inside the gurdwara. Can’t it be called a violation of human rights? People of Sikh community settled in different provinces of India have described this attack as very painful and serious and demanded some immediate action on it. It is also surprising that no country in the world has taken this matter seriously and everyone has kept silent.

People say that because most people of the Sikh community in India live together, that’s why they were very sad when it came to know that someone from Kerala had conspired in this abominable terrorist incident in Kabul. But it is a matter of great regret that the Government of India is also avoiding saying anything in this matter. There is a lot of resentment among the Sikhs by the Indian government’s behavior, and they are demanding that the government take any strict action on the issue at the earliest. Experts say that the Sikh community is the one who always stands at the forefront of any formidable situation and leads. Whether the country is flooded, whether it is a natural disaster, whether it is a terrorist attack or the coronavirus. The people of the Sikh community have always acted in the interest of the society, country and mankind. In such circumstances, only Sikh communities are ready to serve, where the hungry are fed, the destitutes are given shelter. That is why after this incident it becomes the moral responsibility of the Government of India to take full cognizance of this matter and demand punishment for the guilty on a global scale.

The battle of existence is very old

Hindus and Sikhs are the religious minorities of Afghanistan and together these two communities can send a representative to Afghanistan’s Central Parliament. In the year 2018, parliamentary elections held on October 20, Narinder Singh Khalsa was elected unopposed. Narinder Singh is a businessman by profession and holds no political experience, but became a member of the Supreme Legislature (Parliament) of Afghanistan in the next few days. After the father’s death, Narinder Singh Khasla, with the support of Hindu and Sikh community, nominated him for the parliamentary election in his place. In an interview to the news website BBC, Narinder Singh said, “Dad had gone to Jalalabad to attend a conference of Hindu and Sikh community. There was a suicide bomb attack which killed 19 people. Those killed contained my father. Narinder Singh himself was also badly injured in this attack. After the death of Avtar Singh Khalsa, Narinder was taken to India for treatment.

When he returned to Afghanistan after treatment, people from the Hindu and Sikh communities proposed to contest the election in place of the late Avatar Singh Khalsa. Narinder says, “Apart from this, I had no other means. Because most of the older people of both communities were killed in this suicide attack in Nangarhar.” Like millions of other youth of Afghanistan, the youth of the minority community are also victims of backwardness due to the conflict and violence that has been going on for the last 40 years. 38 year old Narinder Singh is the father of four sons. Neither their children nor the children of minority communities are able to achieve good education in Afghanistan.

Narinder says that his people are also able to celebrate their religious rituals and festival festivals with great difficulty. This is not the only problem of these minorities, but during these 40 years the land and other assets of our people have been seized. The main occupation of the people of Afghanistan’s Hindu and Sikh communities is trade and the business of traditional Unani medicines. Narinder Singh Khalsa also does business. They say, in politics I will work not only for Hindus and Sikhs but also for all the people of the country. Hindus and Sikhs have lived in Afghanistan for centuries. These two communities have no involvement in the internal fighting in Afghanistan, but despite this many of our people have died. Nine people from my own family have lost their lives in this war so far.

Narinder Singh says that his family has been living in this country for many generations and is part of this country. He says that the government and the world fraternity should give our rights to the people and it is a matter of pride that the Sikh and Hindu communities are sending their representatives to the Majlis (Parliament). Narinder Singh’s father was an Afghanistan senator and a member of parliament