It’s believed that up to 99 per cent of life on Earth went extinct due to the respiration of those cyanobacteria. 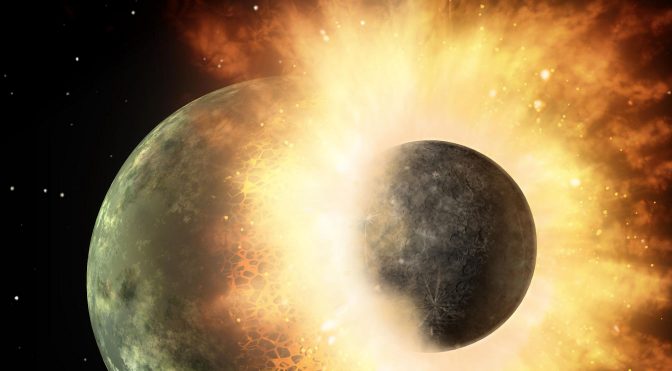 920
VIEWS
Share on WhatsappShare on FacebookShare on TwitterShare on Telegram

Bengaluru (Aryavarth): Look up and you see the colour that defines our world. At least, our world today. It’s a blue that blankets us from birth to death. It’s even visible from space. In February 1990, the Voyager 1 space probe, six billion kilometres away in the outskirts of our solar system, turned its camera back towards home and captured a fleeting blue speck barely a few pixels wide.

“That’s here,” Carl Sagan wrote of the spec in 1994. “That’s home. That’s us. On it everyone you love, everyone you know, everyone you ever heard of, every human being who ever was, lived out their lives.” That’s the Pale Blue Dot. That blue is so ubiquitous, so constant, so reliable, that it’s hard to conceive of the sky being any other colour.

In fact, when NASA received the very first colour images from the surface of Mars from the Viking 1 lander in 1976, its technicians believed there had been a calibration error because the land and sky appeared too red. So they intuitively colour-corrected the sky to a more familiar light blue, bringing it in line with our terrestrial expectations, meanwhile rendering the entire Martian landscape in an unearthly Earthly hue. It was only later they realised they had projected their expectations of a blue sky onto an alien planet, and restored it to its correct red-pink colour. This correction was received with boos from the attendant press, who preferred the more familiar coloration of the incorrectly calibrated original.That might be forgivable, in a way. We crave familiarity. Yet our world wasn’t always familiar. It wasn’t always the Pale Blue Dot. For thousands of millions of years after its formation, our sky was a hazy orange, not dissimilar to what we see on Saturn’s sixth moon, Titan, today. For much of its past, Earth was the Pale Orange Dot.

Yet, were you to travel back in time around 2.5 billion years to witness such a sky, you’d best come prepared with breathing apparatus. This is because the gas that will one day make the sky blue is the same gas that gives us life: oxygen. Earth’s early atmosphere had only negligible traces of oxygen, which were knocked out of water molecules when they collided with a speeding photon of ultraviolet light from the Sun. Remember, with- out oxygen in the atmosphere, there was no ozone layer, which means that UV light bombarded our world. So if you did travel back in time, you’d also need some SPF 1,000+.

Our presumption about the ubiquity of the blue sky speaks to our inherent arrogance as a species. We define the world in terms of human experience and tastes. We shape the world to our liking, even to our detriment. Some scientists have named our current epoch the Anthropocene – from the Greek anthro meaning “human” – in honour (or dishonour) of the fact that our impact on our host world will be visible in the geological record long after we have turned to sediment.

Part of the motivation for declaring the Anthropocene is to acknowledge and take responsibility for the disruption we are causing to the biosphere that sustains us. It’s a cautionary gesture to encourage us to realise that, in our arrogance, what we assume to be permanent and unchanging is really in constant flux. That the world hasn’t always been this way, it hasn’t always been so amenable to our flourishing. And if the delicate balance is disrupt- ed, it may not be familiar for long.
Indeed, the creatures that turned the skies blue all those billions of years ago can serve as a reminder of the im- pact that life can have on this world.

Life emerged on this planet remarkably quickly after it coalesced from the primordial dust cloud. Barely had the molten surface cooled from the collision with a Mars-sized neighbour, shattering the crust and spitting out the Moon, than oceans formed on the surface of the Earth. And somewhere in those murky waters, life began.

The earliest forms of life did what all life forms still do: turn one chemical into another, stealing enough energy in the process to construct more copies of themselves. In this case, they were likely single-celled microorganisms that clung to the sides of hydro- thermal vents that belched sulphur, methane, iron and other minerals into the water, some of which became food.

It’s believed that up to 99 per cent of life went extinct due to the respiration of those cyanobacteria.

These organisms weren’t sophisticated. Their metabolisms were able to eke out just enough energy to survive and reproduce. But slowly, over the course of hundreds of millions of years, they evolved and spread throughout the oceans. The structures they built can still be seen today in the form of the stromatolites that dot the Pilbara in Western Australia. At this time, the sky was a hazy orange, shrouded by methane clouds and thick with carbon dioxide. The only thing that prevented a runaway green- house effect that could turn Earth into a molten hellscape like Venus, was the fact that the early Sun was only around 70 per cent as bright as it is to- day. Fortunately, the greenhouse effect was sufficient to trap enough heat to keep conditions amenable to life.

After a billion or so years passed, a new form of life emerged, one that evolved a clever trick. Instead of being bound to deriving energy only from the chemicals around it, these cyanobacteria were able to use light from the Sun to turn abundant carbon dioxide and water into energy. They invented photosynthesis. But in the process, they also produced waste in the form of a highly toxic chemical: oxygen.

Oxygen is explosively dangerous stuff. It even has its own hazard symbol. This is because oxygen is so greedy for electrons that it will drag the less tightly bound electrons off other at- oms in a reaction that gives off a great deal of energy. The catastrophic bush- fires that recently afflicted Australia can be seen as a giant series of exothermic redox chemical reactions be- tween oxygen and the carbon in trees.

For the first tens of millions of years, the waste oxygen was sucked up by other elements, such as free hydrogen or iron. In fact, over this time the oceans turned red as the suspend- ed iron in the water turned to rust. But these oxygen sinks eventually became saturated, and the leftover oxygen started to accumulate in the atmosphere, clearing away the methane clouds. Clearer skies allowed the Sun’s blue light to be scattered in every direction by the oxygen and nitrogen in the atmosphere, leaving the red light to pass straight through. The daytime sky turned blue and the sunsets turned sanguine.

These cyanobacteria forever changed the colour of the sky and the course of life on this planet. But most of the earlier life forms perished in the presence of toxic oxygen. And the clearing of the methane clouds reduced the greenhouse effect, cooling the planet to levels nearly inhospitable to life. It’s believed that up to 99 per cent of life went extinct due to the respiration of those cyanobacteria two billion years ago. That’s why this period is sometimes known as the Oxygen Catastrophe.

But there was no turning back. For another several hundred million years, cyanobacteria barely clung to life as the Sun slowly brightened, warming the world and enabling new species to emerge that could harness the free oxygen to great effect. Life passed through other milestones, including developing cooperative multicellular organisms, sexual re- production and, eventually, aerobic respiration, which boldly used oxygen to fuel even greater activity – like moving around.

We, and almost all the other life forms on the Earth today, are the ultimate progeny of these precocious photosynthesising microorganisms that emerged over two billion years ago. They made a world in which we were to thrive while they declined. So too, as our industrial respiration changes the atmosphere yet again, we may well make a world in which other species will thrive, but may we decline. Life is not a passive participant on this planetary stage. It can even change the colour of the drapes and murder the players. But an empty stage has no story to tell.