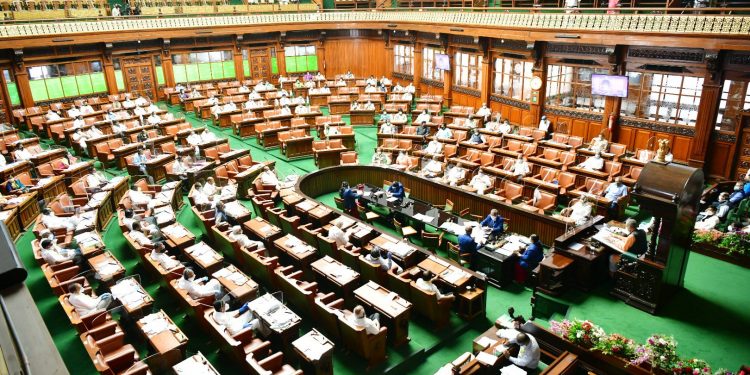 Bengaluru, Dec 6 (Aryavarth) The week-long winter session of the Karnataka legislature from Monday is set to generate heat, as the ruling BJP plans to introduce two controversial bills for banning cow slaughter and love jihad, much against the wishes of the opposition Congress.

“Unlike in the past many years when the winter session of the legislature was at Belagavi in the state’s north-west region, it is being held in Bengaluru from December 7-15 due to the Coronavirus spread,” a legislative official told IANS on Sunday.

As the state government is keen to get the controversial APMC and the Land Reforms Bills passed in the legislative Council where the ruling BJP secured majority after winning all the 4 seats in the October 28 biennial elections, state law and parliamentary affairs minister J.C. Madhuswamy will table them.

The state Assembly passed them by voice vote on September 26 despite stiff opposition by the Congress on the last day of the truncated 8-day monsoon session.

“The twin Bills were not moved in the Council last time (monsoon session), as our party lacked majority and the opposition Congress had more seats then,” a BJP official recalled.

In the 75-member Upper House, the BJP has 31 seats, Congress 28, Janata Dal-Secular (JD-S) 14 and one independent and one chairman.

The ruling BJP has also nominated 5 members to the Council on July 22 to fill the vacancies caused by the members retiring after their 6-year term ended in June.

Assembly Speaker Vishweshwar Hegde Kageri said earlier in the day that the state government plans to introduce 10 Bills, including some to replace the ordinances issued in October-November.

“The Assembly will also debate on ‘one nation, one election’ on December 14-15, as reiterated by Prime Minister Narendra Modi to avoid frequent polls for assemblies and Lok Sabha across the country,” said Kageri.

By wresting the RR Nagar assembly seat in Bengaluru from the Congress and the Sira assembly seat in Tumakuru district from the JD-S in the November 3 by-elections, the ruling BJP has increased its tally to 118 in the 225-member lower house.

At the party’s state unit executive meeting in Belagavi on Saturday, senior members and ministers hinted at introducing the bills to ban cow slaughter and religious conversions for inter-faith marriages, which are termed ‘love jihad’, as Hindu women are allegedly forced to change their religion for marrying Muslim men.

“We will not only oppose both the bills, but also stop the proceedings through the session, as the ruling BJP is bent on pursuing its divisive politics and communal agenda,” a Congress official told IANS.

The ruling party is also bracing to expose the alleged involvement of the Congress leaders in the Bengaluru riots on August 11, in which 3 persons were killed in police firing and the house of its legislator Akhanda Srinivas Murthy and two police stations in the city’s easter suburb were burnt by unruly mobs.

State Animal Husbandry Minister Prabhu Chauhan hinted that the anti-cow slaughter bill would be introduced in the Assembly during the winter session.

Karnataka Home Minister Basavaraj Bommai said at Belagavi on Saturday that the state government was mulling to introduce a bill against ‘love jihad’ on the lines of an ordinance passed by the BJP government in Uttar Pradesh recently.