Similarly, on September 29, the Supreme Court had ordered that all states should provide dry ration to all female and transgender sex workers identified by NACO and district authorities, without insisting on any identity proof or ration card. 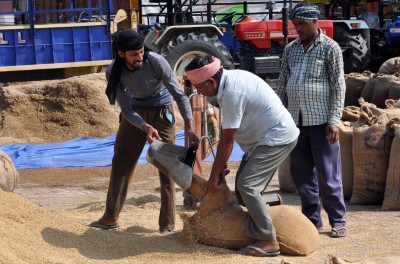 New Delhi, (Agency) Activists of the ‘Right to Food’ campaign have demanded extension of the Pradhan Mantri Garib Kalyan Anna Yojana (PMGKAY) and universalisation of the Public Distribution System (PDS) in the country.
In a letter to Union Minister of Consumer Affairs, Food and Public Distribution, Piyush Goyal, the activists said, “Under PMGKAY in 2021, all persons with a ‘priority’ or AAY ration card under the National Food Security Act (2013) are receiving an additional 5 kg grain per person. This is a much-needed measure to support 80 crore Indians listed under the NFSA in coping with the economic distress caused due to the pandemic.”
On November 5, banking on the revival of the economy and claiming its market interventions to keep prices in check are working, the Centre had announced to end the free distribution of ration under PMGKAY from November 30.
“Since the economy is reviving and our OMSS disposal also being exceptionally good this year, there is no proposal to extend this scheme,” Sudhanshu Pandey, Secretary, Department of Food and Public Distribution (F&PD), had told media persons then.
The scheme — initiated in the wake of the nationwide lockdowns caused by the Covid-19 pandemic — envisaged the distribution of 5 kg food grain (wheat or rice) per person per month free of cost for a maximum of 81.35 crore beneficiaries covered under the National Food Security Act (NFSA), including those covered under Direct Benefit Transfer (DBT).
Pointing out that the pandemic still exists and the uncertainty over livelihoods remains with unemployment at record levels, the activists said, “At a time like this, when food grain stocks are at a record high and people are facing the real possibility of hunger and starvation, the government should universalise PDS to ensure that anyone in need of ration would be supported irrespective of whether he or she possesses a ration card. The state governments must also be provided with additional food grains at subsidised rates to expand the benefits.”
Nearly 42 per cent of India’s population do not possess NFSA ration card, including many vulnerable communities, who are, therefore, unable to benefit from this PMGKAY scheme.
“To ensure that nobody is excluded, it is essential to universalise the PDS and allow everyone who needs ration to access them. Immediate arrangements should be made to universalise the PDS and include dal and edible oils as part of the monthly entitlements. This is even more imperative in the current context of rising inflation,” the letter signed by activists Gangaram Paikra, Aysha, Kavita Srivastava, Dipa Sinha, Anuradha Talwar, Mukta Srivastava and Amrita Johri said.
The letter reminded Union minister Goyal that the Supreme Court in its judgment dated June 29 had directed the Union government and state governments to provide food grains to migrant workers, including those without ration cards, till such time that the pandemic continues.
Similarly, on September 29, the Supreme Court had ordered that all states should provide dry ration to all female and transgender sex workers identified by NACO and district authorities, without insisting on any identity proof or ration card.
Estimates of available FCI stocks indicate that it is feasible to both universalise the PDS and simultaneously extend the PMGKAY for at least another six months, the activists said.