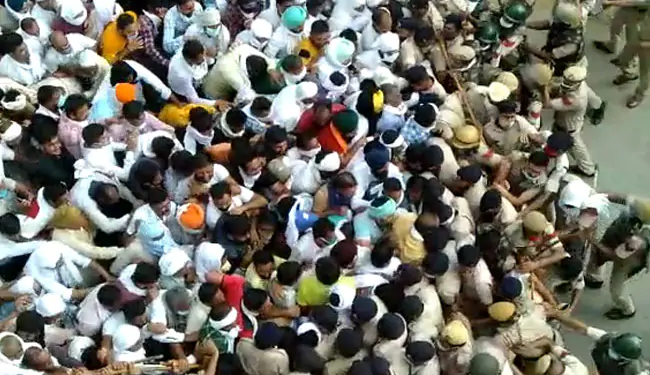 New Delhi ( Aryavarth) The ruling BJP in Haryana on Sunday accused the opposition of the bid to create doubt among farmers about the Centre’s agriculture-related ordinances for their political interests.

Reacting to it, while the INLD dubbed the ordinances as a death warrant for farmers, the Congress asked the BJP to come clean on the issue.

State BJP chief Om Prakash Dhankar on Sunday sought to assure farmers that the ordinances will neither have any impact on the existing ‘mandis’ nor affect the minimum support price (MSP) mechanism.

To grind their political axe, opposition leaders are trying to create an atmosphere of doubt, Dhankar, a former state agriculture minister, said in Rohtak.

Hitting out at the main Opposition Congress, he said they should “stop misleading” farmers on the issue.

He asked farmers to give their views, saying the ordinances will take the shape of law only after their suggestions have been incorporated.

Dhankar called upon the party workers to go from village to village and make people aware of the ordinances and expose the confusion being created by the opposition.

He said the ordinances aimed at bringing structural reforms in the agriculture sector for farmers’ benefit.

State Agriculture Minister J P Dalal also attacked the Congress, saying farmers have not forgotten “how their land was snatched for peanuts when the Congress was in power”.

Dalal said contrary to the falsehood which the opposition is trying to spread, farmers stand to benefit a lot from the ordinances. Dalal said the BJP-led Union and state governments have always given priority to farmers’ interests.

Neither mandis will be closed nor government procurement will be stopped, he said, ruling out the abolition of the MSP mechanism.

Meanwhile, Haryana Deputy Chief Minister Dushyant Chautala told reporters in Gurgaon that the ordinances promulgated by the Centre will benefit farmers in a big way .

The JJP leader, however, condemned the lathicharge on farmers in Kurukshetra’s Pipli during a protest on Thursday.

At a meeting of its state executive in Kurukshetra under the chairmanship of Abhay Singh Chautala, the Indian National Lok Dal (INLD) passed a resolution against the ordinances, describing these as a death warrant for farmers .

Abhay Chautala said Chief Minister Manohar Lal Khattar should write to the Centre for their withdrawal.

Meanwhile, former Chief Minister Bhupinder Singh Hooda questioned the committee of the three MPs formed by the BJP to talk to farmers.

The Leader of the Opposition in the state claimed that the aim of the committee is to mislead farmers.

If the committee has any power, then it should first take action against those behind the lathicharge on farmers in Pipli, he said.

“The committee should immediately withdraw the cases filed against farmers, he said.

On one hand, the government is suppressing farmers by showing fear of legal cases, on the other, they are trying to show that they are holding a dialogue, Hooda said.

The Congress leader asked if the CM and the agriculture minister are not ready to make any changes in the three ordinances, then who will consider recommendations of the committee.

Will the Union government change its decision about these ordinances on the recommendation of this committee, he asked. Hooda said that BJP must “come clean” on the issue.

If the BJP was serious about protecting interests of farmers, they would have consulted them before bringing the ordinances, he said, adding that the committee formed by the state BJP to talk to farmers is an “attempt to break their unity by diverting attention from real issues .