A report of Asian Centre for Human Rights, based on data furnished by the Government of India, acknowledged, 1674 custodial deaths, including 1530 deaths in judicial custody and 144 deaths in police custody from April 01, 2017, to February 28 2018.

7.8k
VIEWS
Share on WhatsappShare on FacebookShare on TwitterShare on Telegram

New Delhi ( Aryavarth): The incident in Hathras has again raised the issue of police brutality in dealing with common man, the way the gangrape incident was scuttled has no parallel in history of india. If the custodians of law indulge in committing or abetting crimes, then no member of our society will be safe and secure. A sense of insecurity comes in the minds of the citizens if they see police officers who are tasked for security and protection of the citizens, indulging in such illegal methods.

The Honorable Supreme Court of India has recognized that custodial violence, including Torture and death in lock-ups, violates the rule of law and is against article 21 of our Constitution.

“Torture has not been defined in the Constitution or in other penal laws. Torture’ of a human being by another human being is essentially an instrument to impose the will of the ‘strong’ over the ‘weak’ by suffering. The word Torture today has become synonymous with the darker side of the human civilization,” observed the Hon’ble Supreme Court of India In D.K. Basu v. State of West Bengal matter in 1996.

A report of Asian Centre for Human Rights, based on data furnished by the Government of India, acknowledged, 1674 custodial deaths, including 1530 deaths in judicial custody and 144 deaths in police custody from April 01, 2017, to February 28 2018.

Twenty-three years and three Visionary Prime Ministers later, Late Atal Bihari Vajpayee, Manmohan Singh, and Narendra Modi, the country is yet to see any action. The country has been saddened by both UPA and NDA Government by not passing the Anti Torture law.

India signed the U.N. Convention against Torture on October 14, 1997, however, so far it has not been ratified in India. Out of 170 signatories, India remains one of the only four countries are yet to ratify the Convention, even countries like China, Pakistan and Afghanistan have ratified the U.N. convention. Ex UPA Law Minister Ashwani Kumar’s petition before the Supreme Court in 2018 to expedite the Anti Torture law said. “Since there is no scientific method of investigation, torture remains integral to the investigation to obtain confessions from suspects.”

The Journey Of The Prevention of Torture Bill

To ratify the U.N. Convention of 1997, the Prevention of Torture Bill 2010 was introduced in the Lok Sabha and passed on May 06, 2010. When it moved to Rajya Sabha, the elders referred the Bill to a Select Committee, which advocated amendments to the Bill to make it in line with the U.N. Torture Convention. However, due to lack of focus and priority, the Bill lapsed with the dissolution of the 15th Lok Sabha. Ex Law Minister from UPA government, has pinned the blame on Kamal Nath, the then Parliamentary affairs minister for not showing urgency.

In response to a civil writ petition in the Hon’ble Supreme Court, the Government referred the matter to the Law Commission of India, the highest recommendatory body on statutes in India. On October 30 2017, in its 273rd report, it had recommended that the Centre it enact the Prevention of Torture Bill, which makes public servants responsible for custodial Torture. Justice B S Chauhan of the Law Commission attached a draft copy of the proposed to the report.

In Dec 2017 the said Bill was introduced as a private member bill in the Rajya Sabha by V. Vijayasai Reddy from YSR Congress. And then again, in 2018, in the same form in the Lok Sabha by Shri Om Prakash Yadav, Ex M.P. BJP from Siwan, Bihar. With the dissolution of the 16th Lok Sabha, the Bill has now lapsed.

In an affidavit dated February 12, 2019, filed in the Hon’ble Supreme Court, the Government of India disclosed that all States and U.T.’s had filed their inputs/suggestions. And that the question of enacting the Prevention of Torture legislation is under consideration. From February 2019, 17 months have passed, and no action is visible by the Modi Government.

“One hundred and nineteen States are now party to the Convention against Torture. But not our own country. On June 26 1997, twenty three years ago, our Government announced its intention to ratify the Convention. But this has not yet happened, despite the promise made, on October 14 1997, when we signed the treaty, to “uphold the greatest values of Indian civilization and our policy to work with other members of the international community to promote and protect human rights,” said Justice Verma. Hope the Government of India, listens to the voice by Justice Verma.

When The Protector Becomes The Predator, Society will Cease to Exist.

In 1980, in its Fourth Report, The National Police Commission noted that custodial Torture had been prevalent and acknowledged that Torture on a person in police custody was the most dehumanizing. Its widely known that Police practice torture to achieve quick results through short cut methods.

“The policemen who commit criminal acts deserve harsher punishment than other persons who commit such acts because it is the duty of the policeman to protect the people and not break the law themselves. If the protector becomes, the predator society will cease to exist” observed Hon’ble SC in a verdict.

In the year 1961, the Allahabad High Court had to make the following remarks, in a case pertaining to police behaviour. Though, the Hon’ble Supreme Court expunged these remarks, after an appeal from the State of Uttar Pradesh.

That there is not a single lawless group in the whole of the country whose record of crime comes anywhere near the record of that organized unit which is known as the Indian Police Force.’……Where every fish, barring perhaps a few stinks, it is idle to pick out one or two and say that it stinks.

Is Mallaya, Choski, Lalit and Nirav Modi Benefiting From lack of Torture Law?

“India faces problems in extradition of criminals from foreign countries because of this (having no law against Torture). It’s in our own national interest to have such a law,” a bench of then Chief Justice of India JS Khehar and Justice DY Chandrachud said in a 2017 matter.

India’s extradition success rate may stand at a percentage lower than 30 per cent. In response to a query in 2018, regarding Indians involved in financial irregularities living abroad, the MEA said that there are currently 28 such individuals under investigation by both the Central Bureau of Investigation (CBI) and Enforcement Directorate (E.D.). From 2002 to 2018, only one fugitive has been extradited from the U.K., where most financial fugitives are hiding. European countries and the United Kingdom are prone to rejecting extradition cases, due to human rights concerns, as the possibility of receiving “torture, inhuman and degrading treatment” at the hands of the State requesting extradition.

Article 3 of the European Convention on Human Rights reads ‘No one shall be subjected to torture or inhuman or degrading treatment or punishment’. There are no exceptions or limitations on this right. This provision usually applies not only to torture but also cases of severe violence in police custody and poor conditions in detention. It is an absolute right, and in no circumstances, to Torture someone will ever be justifiable.”

Thus without the passage of torture law, the prospect of securing the return of Modi and Choksi, and other economic offenders, looks bleak.

S.C. has ruled “Khaki” is not above the law

“Police excesses and the maltreatment of detainees/undertrial prisoners or suspects tarnishes the image of any civilized nation and encourages the men in “khaki” to consider themselves to be above the law and sometimes even to become a law unto themselves. Unless stern measures are taken to check the malady of the very fence eating the crop, the foundations of the criminal justice-delivery system would be shaken, and civilization itself would risk the consequence of heading towards total decay resulting in anarchy and authoritarianism reminiscent of barbarism.” said the Hon’ble Supreme Court in Munshi Singh Gautam vs the State of M.P.

“India’s future as a democracy and an economic powerhouse cannot be secured by an obsolete criminal justice system where the police work for the rulers of the day and not for the real masters, the people of the country.” Says the Status of Policing in India Report 2019 by Centre for the Study of Developing Societies (CSDS), Tata Trusts and Lal Family Foundation rightly. 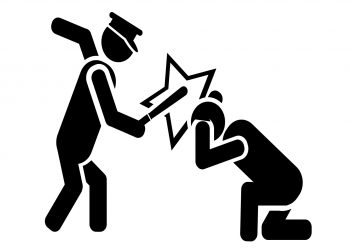