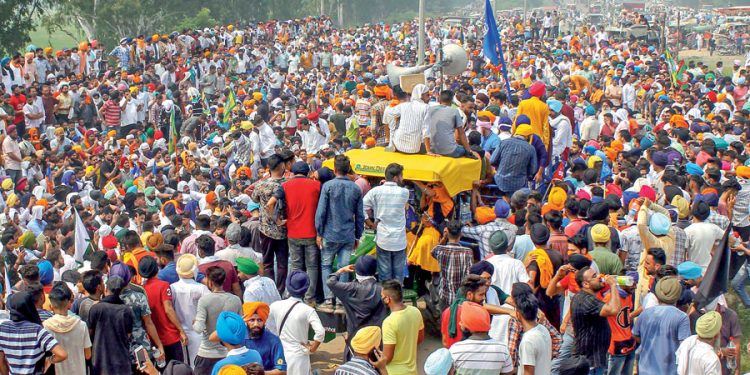 New Delhi, Dec 2 (Aryavarth) The agitating farmers on Wednesday urged the Union government to convene a special session of Parliament to repeal the three farm laws, besides threatening to hold a nationwide protest on December 5.

Addressing a press conference at the Delhi-Haryana border in Singhu, Darshan Pal, President of the Krantikari Kisan Union, said, “We will celebrate December 3, when the Bhopal gas tragedy took place several decades ago, as anti-corporate day. On December 5, we will protest against the Modi government and the corporate houses and burn their effigies.”

It will be a nationwide protest where the farmers will burn the effigies.

He said that artistes and sportspersons have given a call to return the awards they have received from the government.

“We thank the people who have announced to return their awards to the government and we are hopeful that those who have got national awards will also return them as a mark of solidarity with the farmers’ movement,” Pal said.

He added that the farmer leaders will give a written 7-10 page recommendation on why they want the farm laws to be repealed.

“We demand the government to call a special session of the Parliament to repeal the three farm laws,” Pal said.

He informed that during the meeting with the government on Tuesday, it seemed to them that the government tried to divide them and tried to mislead them on the three farm laws.

The press conference was held after the farmers’ groups held talks earlier in the day.

Pratibha Shinde of Lok Sangharsh Morcha while addressing the media said that they shall burn effigies in every district of Maharashtra on December 3.

“We shall burn the effigies of government and corporates in Maharashtra on December 3 and in Gujarat on December 5,” she said, adding that Thursday is the last chance for the government to take a decision to repeal the laws otherwise this movement will become huge and the government will fall.

Even as the farmers threatened the government, Union Agriculture Minister Narendra Singh Tomar told the media that they will hold discussions with the farmers’ leaders on Thursday.

“We have called a meeting with farmers tomorrow and let’s see to what extent issues can be resolved,” Tomar said.

He told the farmers that the laws are in the farmers interest and the reforms have come after a long wait.

“But if they have any objection to it then we are ready to address their concerns,” Tomar added.

Earlier in the day, Union Home Minister Amit Shah was apprised of the farmers demand by Tomar and Union Railways and Commerce and Industry Minister Piyush Goyal about Tuesday’s parleys they had with the leaders of farmers at Vigyan Bhavan.