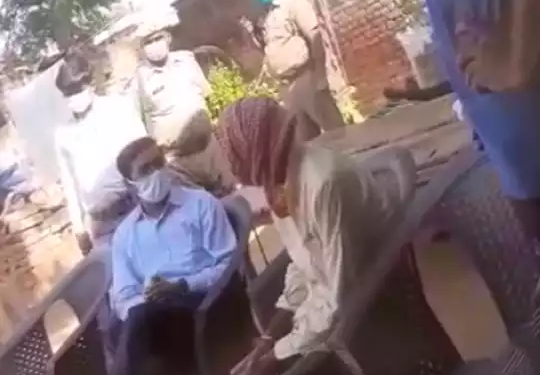 8.8k
VIEWS
Share on WhatsappShare on FacebookShare on TwitterShare on Telegram

New Delhi (Aryavarth): Congress leader Rahul Gandhi and Priyanka Gandhi Vadra on Thursday alleged that the Hathras administration and Uttar Pradesh are forcing the family of the Hathras gangrape victim family to make statements in their favour. Hathras DM PK Laxkar, however, denied the “negative rumours”.

Both the leaders alleged that the Uttar Pradesh government is attempting to cover up the case.

Rahul Gandhi posted a video, in which a woman purportedly the victim’s brother-in-law seen saying that the family is being “warned” and has been “receiving threats”.

“District Magistrate is forcing us and saying that we are changing our statements and we can not be trusted. They are giving us threats and warning to speak in their favours,” said the woman in the video.

“You will suppress the voice of the poor-dalit-tribal, How long will you hide the truth How many more daughters will be secretly burnt? You will not be able to stop the voice of the country now,” Rahul Gandhi captioned the video.

Priyanka Gandhi also posted a video in which she alleged that Hathras DM is forcing threatening the victim family.

Hathras District Magistrate PK Laxkar on Thursday denied the “negative rumours” about the rife between him and family of the gangrape victim.

“I met with 6 family members of the victim yesterday and we spoke for about an hour and a half. I met with them again today to see their point of discontent. I deny the negative rumours which are rife about my interactions with them. Their main point of apprehension is that the convicted must be punished and be hanged to death. I tried to allay their fears and told them that the matter would be tried in a fast track court,” DM said.

The official described the reason why media is not being allowed to access the site of the incident.

“The media is not being allowed to access the site of the incident because the investigation of a crime scene requires privacy. The SIT was there all day today. There is no ‘special’ reason why the media isn’t being allowed,” DM Laxkar said.

Earlier in the day, Congress leaders Rahul Gandhi and Priyanka Gandhi were arrested by UP Police at Yamuna Expressway in Gautam Budh Nagar when they were marching to meet the family of Hathras gangrape victim, who died while receiving treatment in Safdarjung hospital in the national capital on Tuesday.

According to police, the Wayanad MP was arrested under Section 188 of the Indian Penal Code (IPC). Gandhi was allegedly shoved and pushed to the ground by Uttar Pradesh Police.

The 19-year-old had succumbed to assault injuries in Delhi’s Safdarjung Hospital on Tuesday where she was brought on Monday from Aligarh Muslim University Medical College.

The government has formed a three-member SIT to probe the case and said the matter will be heard in the fast track court. All four accused in the case have been arrested.

The senior police official said that the postmortem, which was conducted by a team of doctors in Delhi, has established that the death was caused by the trauma of her neck injury.