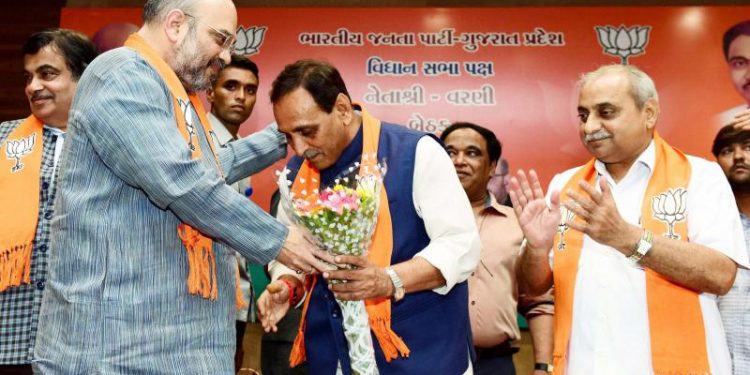 Bengaluru (Aryavarth): While the real estate has come to stop across the country due to Covid, Rajkot real estate has got a boost thanks to five lac square feet new office of BJP. The ruling BJP raised Rs 2,410 crore ahead of the 2019 Lok Sabha elections, and notably, 60% or Rs 1,450 crore has come through Electoral Bonds, the controversial instrument in which donors’ identity is not revealed.

Gujarat CM Vijay Rupani laid the foundation stone of a new building which will function as the Saurashtra zonal office of Bharatiya Janata Party (BJP), as well as the office of the party’s Rajkot city unit, near Shital Park BRTS bus stop on 150 feet ring road in Rajkot on Monday. The construction of the new office building will take around 18 months.

When asked about the project’s cost, the spokesman said, “Now that the layout and the design have been finalised, and the foundation stone has been laid, we shall conduct the exercise of estimating the cost of the project.”

On the first floor, offices of the president and the general secretaries of BJP’s Rajkot city unit will be located. A press room, an information technology war-room, a social media cell and a pantry will also be available on the first floor, said BJP spokesman for Saurashtra-Kutch, Raju Dhruv.

“There will be three elevators, two stairwells and a ramp for the movement of people in the building. On the terrace, solar panels will be installed for generating electricity. The semi-green building has been conceptualised keeping in mind the needs of the party for the next 25 years,” Dhruv further said.

Incidentally, Rajkot is the hometown and election constituency of Rupani. Presently, the party’s city unit has an office in Karanpara area. However, the spokesman said that the need for a bigger office was felt. “While our party organisation does not have zonal units, the proposed new building will have space and facilities to convene meetings of Saurashtra zones as Rajkot is the centre of Saurashtra-Kutch,” said Dhruv.