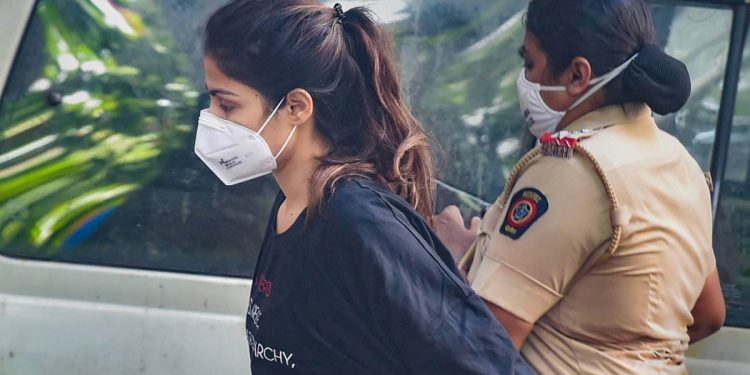 The court rejected the argument that celebrities deserve specially harsh treatment in such cases so as to `send out a message’.

After spending 28 days in jail, Rhea stepped out of the Byculla women’s prison here around 5.30 pm amid a scrum of mediapersons.

While granting her bail on a personal bond of Rs one lakh, the court asked the actor to appear before the Mumbai police for 10 days and before the Narcotics Control Bureau (NCB, which had arrested her) once a month for the next six months.

The HC observed in its order that Rhea did not have any criminal antecedents, and it was unlikely that she would tamper with evidence or affect the probe while out on bail.

Rhea, however, can’t leave Mumbai without the NCB’s permission and for travelling outside the country, she will need permission from the special NDPS court here, the HC said.

The NCB has charged Rhea under the stringent Section 27-A of the Narcotic Drugs and Psychotropic Substances (NDPS) Act that pertains to “financing and harbouring illegal drug trafficking”. It entails imprisonment up to 10 years in prison and a bar on the grant of bail.

The HC said simply paying for a particular drug transaction does not qualify as financing drug traffic.

“The allegations against the applicant of spending money in procuring drugs for Sushant Singh Rajput will not, therefore, mean that she had financed illicit traffic,” the court said.

It also noted that harbouring an offender as described under the Act would mean providing money for that person’s drug consumption while also giving him shelter and food.

Rajput, for whom Rhea allegedly procured drugs, had no apprehension of arrest and therefore, the charge of harbouring too could not be applied, it said.

The court also dismissed the argument that Rhea’s bail be rejected to `send out a strong message’ to society.

I do not agree,” Justice Kotwal said.

“Everybody is equal before law. No celebrity or role model enjoys any special privilege before the court of law.

Similarly, such person also does not incur any special liability when he faces law in the courts,” he said.

The HC, however, rejected the bail plea of Rhea’s brother Showik.

“The applicant (Showik) was facilitating procurement of drugs from one party for supplying them to Sushant Singh Rajput. He was clearly involved in illicit trafficking or illegal trade of drugs,” the court said.

“The applicant appears to be an important link in the chain of drug dealers. He was in touch with different dealers.

He had monetary transactions with the,” the court said.

Justice Kotwal also held that a detailed interpretation of the NDPS Act and previous judgments of the Supreme Court showed that all offences under the Act were non-bailable. Also, section 27-A can be invoked even if quantity of the drug is not “commercial”, the judge said.

However, in Rhea’s case, since there was no financing or harbouring (of drugs or its consumers), Section 27-A could not be applied, the HC said.

Granting bail to Miranda and Dipesh Sawant, the court said they had simply procured or collected drugs on directions of Rajput or Rhea.

Rhea’s lawyer Satish Maneshinde said that “truth and justice have prevailed”. “The hounding and witch-hunt by three central agencies–the CBI, ED and NCB –of Rhea should come to an end. We remain committed to truth,” he said.

Rajput, 34, was found hanging at his apartment in suburban Bandra on June 14. After a case of alleged abetment of suicide was registered against Rhea by Rajput’s parents, a parallel probe into alleged drug procurement by her also began on the basis of her WhatsApp chats. 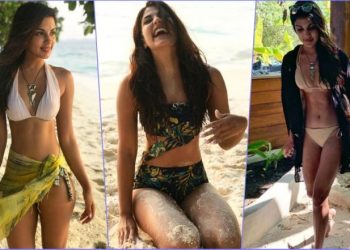