"State Youth and Sports Minister C. T.Ravi has submitted a proposal to Union Minister of State for Youth Affairs and Sports Kiren Rijiju in New Delhi on Tuesday for the Central clearance to build the sports complex at a cost of Rs 18.5 crore," the department official said. 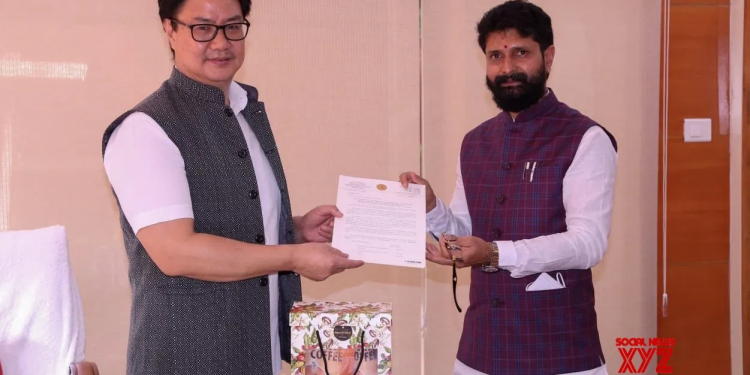 207
VIEWS
Share on WhatsappShare on FacebookShare on TwitterShare on Telegram

Bengaluru, Aug 19 (Aryavarth) Karnataka has sought the Centre’s nod to build a multipurpose indoor stadium and synthetic athletic track at Chikkamagaluru in the state’s northwest region under the ‘Khelo India’ initiative to promote sports and games in towns and villages.

“State Youth and Sports Minister C. T.Ravi has submitted a proposal to Union Minister of State for Youth Affairs and Sports Kiren Rijiju in New Delhi on Tuesday for the Central clearance to build the sports complex at a cost of Rs 18.5 crore,” the department official told IANS.

The picturesque Chikkamagaluru is 250 km northwest of Bengaluru in the southern state’s Western Ghat region, known for coffee plantations.

“Karnataka has significantly contributed to the national sports by grooming champion athletes who brought laurels to the country by their outstanding performance at the international level,” asserted the official.

In the 2019 Asian Games in Kathmandu, 20 sports persons from Karnataka represented the country and seven of them won nine medals.

“Though world class sports infrastructure has been developed in Bengaluru over the years, there is a need to create similar facilities in tier-2 and tier-3 cities for catering to the growing demands of talented sports persons,” noted the official.

The state has implemented all sports competitions and improved the sports infrastructure for the benefit of all.

In view of the sports potential in the district and demand for sports infrastructure, the state has sought the Central approval for the stadium and track under the Khelo India programme, initiated to revive the sports culture at the grassroots level and enhance the prospects of winning medals for the country.

“As the importance of sports and fitness in life is invaluable, playing sports inculcates team spirit, develops strategic and analytical thinking, leadership skills, goal setting and risk taking,” said Ravi in a statement on the occasion.

Noting that sport was a key component of national development, Ravi said the country made steady progress in sports and games over the years.

“As the potential has to be showcased at a global platform, we have to inspire young talent, give them the infrastructure and training of the highest level.

We also need to inculcate a spirit of participation in sports that enables players to display their true potential,” added Ravi.