“On July 31, the chief minister, however, met state Governor Vajubhai Vala at Raj Bhavan in the city centre along with state home minister Basavaraj Bommai. Later, National Education Policy draft committee chairman K. Kasturirangan called on him at his residence,” the official recalled. 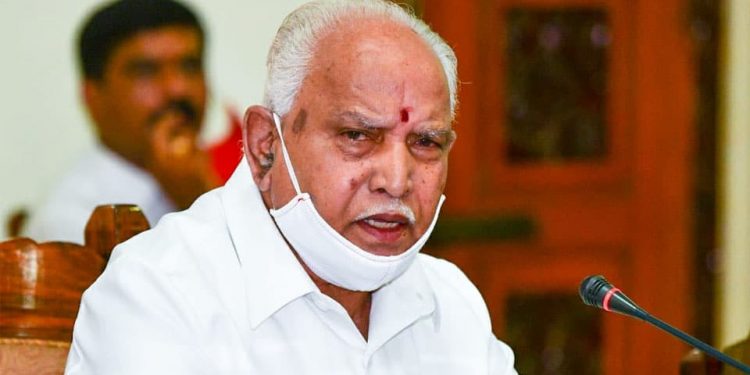 Bengaluru, Aug 3 (Aryavartha) Karnataka Chief Minister B.S. Yediyurappa has tested positive for coronavirus and has been admitted to a private hospital, an official said on Sunday night.

“The Chief Minister took a test after feeling unwell. As the test was positive, he has been admitted in a private hospital on the recommendation of doctors,” the official told IANS here.

In a tweet in Kannada later, the 78-year-old Yediyurappa said he was fine but got admitted to a hospital as a precaution on the advice of doctors.

“I request those who have come in contact with me recently to be observant and exercise self-quarantine,” he said.

State Medical Education Minister K. Sudhakar, who is in-charge of Covid care in the southern state, confirmed that Yediyurappa tested positive for the infection.

“I pray that he (Yediyurappa) will heal soon, as prayers of the people are with him. He will soon recover and return to work,” tweeted Sudhakar in Kannada.

The chief minister has been at home in the official residence since Friday due to three government holidays since July 31 to Sunday.

“On July 31, the chief minister, however, met state Governor Vajubhai Vala at Raj Bhavan in the city centre along with state home minister Basavaraj Bommai. Later, National Education Policy draft committee chairman K. Kasturirangan called on him at his residence,” the official recalled.

Yediyurappa also inaugurated on Friday the new building of the Karnataka State Electronics Development Corporation Ltd (Keonics) for housing incubation, warehousing and start-ups in the city, where he came in contact with many people though he wore mask and maintained physical distance.

State Deputy Chief Minister C.N. Ashwath Narayan and other officials accompanied him for the function.

On July 30, the chief minister flagged off the tunnel boring machine for the second phase of the metro rail project in the city centre, where people were present in large numbers.

The septuagenarian leader completed one year as chief minister on July 26 after the ruling BJP returned to power on July 26, 2019.