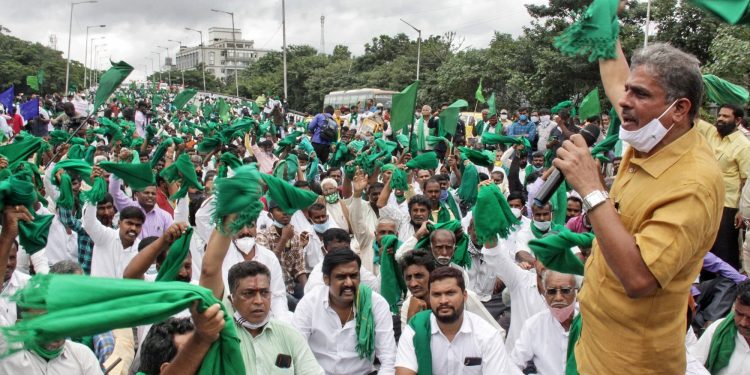 Bengaluru: Farmers under the banners of Karnataka Rajya Raitha Sangha (KRRS) and Hasiru Sene participate in a protest march against the Amendment in the Land Reforms Act, from City Railway station to Freedom Park in Bengaluru on Sep 21, 2020. (Photo: IANS)

Bengaluru,  (Aryavarth) The day-long Bharat bandh evoked huge response in towns and villages across Karnataka on Tuesday, as thousand of farmers staged massive rallies and demonstrations against the 3 farm laws the Centre enacted recently and called for their withdrawal immediately.

The response to the shutdown call was, however, mixed in cities, as normal life was partially disrupted, with markets and APMC yards remaining shut in Bengaluru, Mysuru, Mandya, Mangaluru, Hubballi, Belagavi, Kalaburagi, Shivamogga, Raichur, Ballari and Bidar.

As the state farmers’ associations exempted Bengaluru from the dawn-to-dusk bandh, it was business as usual across the city though vehicular traffic was affected due to rallies by various organisations supporting the shutdown.

“The bandh was successful, as the response was overwhelming in towns and villages across the state where hundreds of farmers took out huge processions and staged dharnas, raising slogans against the anti-farmer laws,” Karnataka Rajya Raitha Sangha President Kodihalli Chandrashekar told IANS.

Braving inclement weather, the Covid scare and tight security, farmers, workers and their supporters blocked roads and highways by squatting on them for hours.

“The bandh was peaceful barring stray incidents of stone-throwing, blocking state-run buses from operating and forcing shops and eateries to down their shutters by some organisers in cities and towns,” a Home Department official told IANS here.

Elaborate security arrangements were made with additional deployment of police personnel in cities and towns across the state to maintain law and order and prevent untoward incidents.

Sporting green towels on their shoulders and headgear, hundreds of farmers in white dress raised slogans against the BJP-led Central and state governments for enacting “anti-farmer laws”.

State-run transport corporation operated skeletal bus services in cities and towns as commuters were less due to the bandh and Covid-induced restrictions.

As essential supplies and services were exempted from the bandh, normal life was not affected across the state.

Banks, hotels and petrol pumps were also open in cities and towns.

Scores of farmers came to cities and towns from villages in tractors and bullock karts to stage protests and sit-on demonstrations.

Farmers and members of the Aikya Horata, a coalition of a farmer, labour and Dalit groups urged the NDA government to repeal the 3 farm laws and the APMC bill and the land reforms bill by the state government.

The opposition Congress not only extended support to the bandh call, but also participated, with its leaders, including state unit President D.K. Shivakumar leading a rally from Town Hall to Freedom Park in the city and a sit-in demonstration at the Mahatma Gandhi statue in Vidhana Soudha premises.

“We will fight the injustice being meted out to farmers by the Central and state governments with their anti-farmer and anti-labour laws, which only benefit corporates,” said opposition leader and former Chief Minister Siddaramaiah.