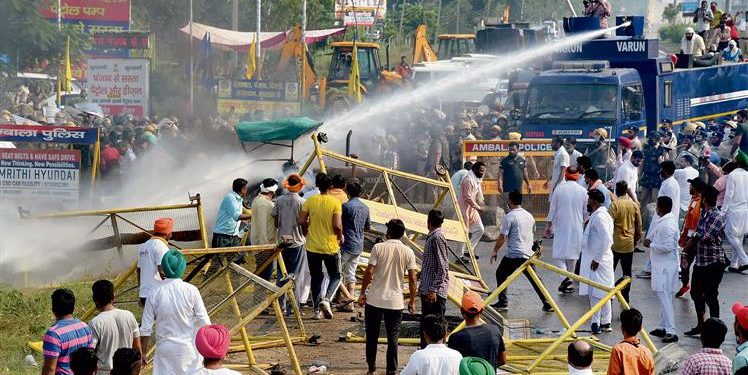 Chandigarh, Nov 19 (Aryavarth) Up in arms against the three agriculture-related Acts enacted by the Centre in September, representatives of farmers across the country on Thursday unanimously decided here to rally in Delhi on November 26 to lodge their protests.

Representatives of all-India farmer unions decided on this issue after their parleys with Union Ministers remained inconclusive.

The farmer leaders warned the respective state governments that if they were stopped from proceeding towards Delhi, they would stage indefinite protests en route. They also demanded permission to rally at Ramlila Maidan, failing which they threatened to block entry points to Delhi from Haryana and Uttar Pradesh.

The meeting of representatives of All India Kisan Mahasangh, All India Kisan Sangharsh Coordination Committee, and a farmer forum led by BS Rajewal and Gurnam Singh Chanduni was called to chalk out the ‘Delhi Chalo’ programme.

The farmer organisations said that more than 450 farmers organisations from across the country had come together for the protests that will continue indefinitely.

Swaraj India national President Yogendra Yadav told the media that the Centre should first end the ‘economic blockade’ in Punjab by allowing the goods trains to ply.

He said this it was for the first time in the history of independent India that farmer organisations from all over India, cutting across party lines and ideology, were coming together on a platform to save their livelihood and those of farm labourers and commission agents.

“The farm laws are an assault on Indian farmers. They are aimed at corporatisation of agriculture and makes farmers more vulnerable,” Yadav, who attended the meeting as the national working group member of the All India Kisan Sangharsh Coordination Committee, said.

Rashtriya Kisan Mazdoor Mahasangh President Shiv Kumar Sharma said the laws were akin to ‘death warrants’ for farmers as they would benefit a handful of corporates.

“These laws should have a provision that if any trader purchases agricultural produce below the MSP (minimum support price) then the difference between the MSP and the actual rate should be paid by that trader as a fine,” Sharma, a farmer leader from Madhya Pradesh, said.

He said that Punjab took the lead in the agitation against the central government and “now it is spreading across the country”.

Bhartiya Kisan Union’s President Balbir Singh Rajewal said they should be allowed to stage a protest at Ramlila Maidan in Delhi. “If farmers are stopped from going to Delhi, they will block all entry points to Delhi from Haryana and Uttar Pradesh,” he warned.

The farmers’ movement has already taken the shape of a “people’s movement” with the masses on their own boycotting the corporates and their products, Rajewal added.

Earlier, day-long talks between the Union government and the farmers ended inconclusively in Delhi on November 13.

Punjab is facing acute power shortage with cuts lasting up to five hours daily in many parts as all five thermal plants have been shut down owing to depleted coal stocks in the wake of non-plying of goods trains in the state.

Officials told IANS the trains have been suspended in Punjab since September 24 as farmers began their rail blockade campaign to protest against the farm laws.

The Farmers’ Produce Trade and Commerce (Promotion and Facilitation) Act, the Farmers (Empowerment and Protection) Agreement of Price Assurance and Farm Services Act and the Essential Commodities (Amendment) Act were enacted in September.

Farmers protesting against the laws have expressed apprehension that these laws would pave the way for the dismantling of the minimum support price system, leaving them at the ‘mercy’ of big corporate entities.