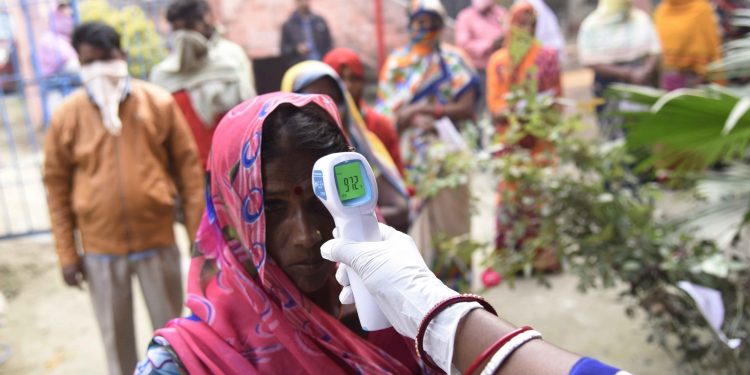 Vaishali: A voter undergoes thermal screening at a polling station amid COVID-19 pandemic, during voting for the third and the last phase of Bihar Assembly elections, in Vaishali on Nov 7, 2020. (Photo: IANS)

Bengaluru, Dec 27 (Aryavarth) Moderate to brisk polling was recorded in Karnataka’s second phase of polling in 2,709-gram panchayats across the state, an election official said on Sunday.

Over 1.4 crore voters in rural areas were eligible to exercise their franchise in the second phase.

Voters were allowed to enter the booth after thermal screening one at a time to ensure social distancing and prevent the virus spread.

“Around 52 per cent average voting was registered in about 20,728 booths till 2 p.m. in 2,709 local bodies across the state. Polling has been peaceful since it began at 7 a.m. in 109 taluks under Covid-induced guidelines,” State Election Commission (SEC) Commissioner B. Basavaraj told IANS here.

“Elaborate arrangements were made in all the 30 districts across the state for free and fair elections at the grass-root level. As per the standard operating procedures (SOPs) of the Union Ministry of Home Affairs and guidelines of the Union Health Ministry, wearing of a mask, maintaining physical distance and sanitizing hands before and after casting the manual ballot are being observed to contain the virus spread,” asserted Basavaraj.

“Covid-hit voters have been allowed to exercise their franchise during the last hour of polling – 4 to 5 p.m, by wearing personal protection equipment (PPE) as in the first phase of polling,” the official said.

“There are more than 50 per cent women candidates in the fray, contesting under reservation and general categories. More women also get elected in both the categories,” Basavaraj said.

Though the local body elections are not contested on party symbols or tickets, the ruling BJP and opposition Congress and Janata Dal-Secular (JD-S) will claim victory based on the loyalty and affinity of the respective candidates to them.

“The candidates are contesting in their name and not on any party symbol. Many of them may be members of the respective parties or owe allegiance to the ruling or opposition parties,” added Basavaraj.

In the last 2015 GP elections, candidates supported by then ruling Congress claimed to have won in majority seats, followed by contestants of then opposition BJP and JD-S.

Over 80 per cent turnout was recorded in the first phase of polling in 3,019 local bodies in 117 taluks across the state on December 22.

A total of 1.17 lakh candidates were in fray for 43,238 GP seats in the first phase after 4,377 were declared elected unopposed ahead of the polling.

Vote count for both phases of polling is on December 30.