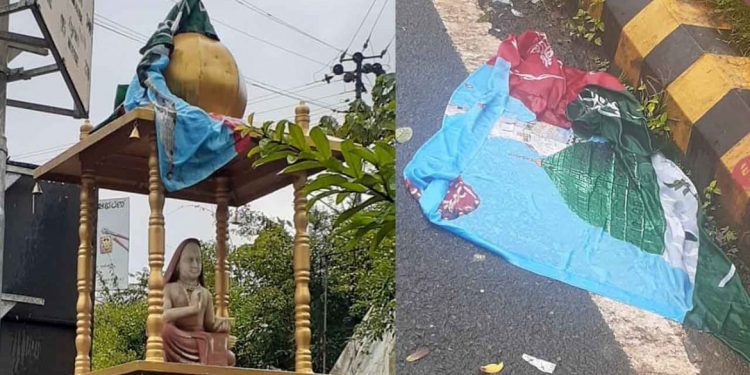 Bengaluru, (Aryavarth) A flag was found atop the canopy over a statue of Sri Adi Shankaracharya in the temple town of Sringeri in Chikkamagaluru district on Thursday, police said. While the police said it was a flag which did not belong to any political party or religion, local BJP leaders alleged it was that of the Social Democratic Party of India (SDPI).

“There is a Shankaracharya statue and above it is the gopuram (canopy). The flag was found there. It is neither a party flag nor Islamic flag. It is some blue red and green flag,” a police officer said.

The statue is located at the Shankaracharya Circle (road junction) in the town. He added that some miscreant had thrown it on the gopuram, which got stuck there. “There is no damage to the statue. Morning when we got to know we removed it. An FIR has been registered,” he added.

The local BJP leaders lodged a complaint over the mischief. BJP MLA and former minister S A Ramadass too condemned the act.

“It has come to the knowledge that SDPI’s flag was put on Shankaracharya’s statue. I have asked the officials concerned to arrest the culprit. Our government will not tolerate such anti-social elements,” he tweeted, posting a picture of the flag atop the canopy.

Sringeri is one of the four seats of spiritual learning set up by the Adi Shankaracharya about 1,300 years ago. Swami Sri Bharati Teertha is the present Shankaracharya of the Sringeri mutt.