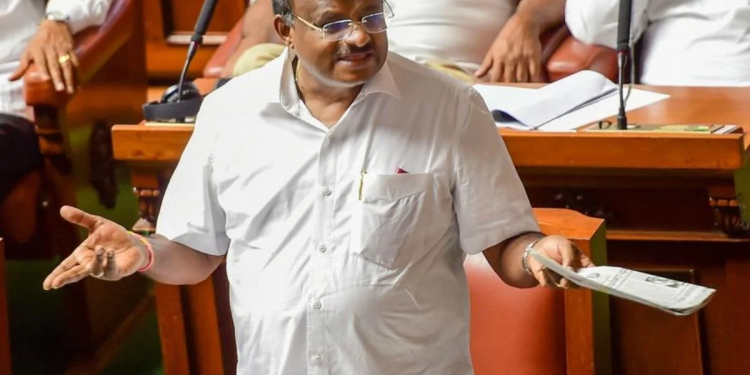 Bengaluru, Dec 20 (Aryavarth) Leaders of the Bharatiya Janata Party (BJP) and the regional outfit Janata Dal (Secular) (JD (S)) on Sunday denied merging amid speculation of such a possibility before the next Karnataka Assembly elections in 2023.

“JD (S) merging with BJP is a rumour and far from truth. Its speculative. JD-S is extending us issue-based support like removing legislative Council chairman Prathapchandra Shetty and the land reforms bill,” said state Chief Minister B.S. Yediyurappa in a statement in Kannada here.

JD (S) state president and former Chief Minister H. D. Kumaraswamy also denied that his party was merging with the BJP and termed it as a baseless rumour.

“Speculative reports about our party (JD (S)) merging with BJP is imaginary. At the most, we may extend issue-based support to the BJP if need be in the public interest. As a party of Kannadigas with self-esteem, we will never think of a political merger,” said Kumaraswamy in a tweet in Kannada.

Ironically, Yediyurappa’s denial came hours after BJP’s legislator Arvind Limbavali told reporters in Kannada earlier in the day that “there was a possibility of some party merging with a national party before the next assembly elections, without taking names of the parties”.

“The news about JD (S) merger with BJP is a lie. State assembly elections are 30 months away. It is too premature to talk about the merger,” asserted Yediyurappa.

The opposition Congress slammed the JD (S) for supporting the ruling party in passing the Land Reforms Bill in the Council during its truncated winter session early this month and joining hands with it in moving the no-confidence motion against Shetty as Chairman as he a Congress MLC.

Merger speculation was rife after senior JD (S) legislator in the Council Basavaraj Horatti said at Hubballi earlier in the day that the regional party was in alliance with the BJP in the southern state.

JD (S) supremo H. D. Deve Gowda, however, ruled out his party’s support to the anti-cow slaughter bill of the ruling BJP in the Council after it was passed in the Assembly recently amid walkout by it and boycott by the Congress.

“As JD (S) is not extending support to the anti-cow slaughter bill, we are planning to amend the law through an ordinance,” reiterated Yediyurappa.