Army Called In For Flood Support Work in Karnataka 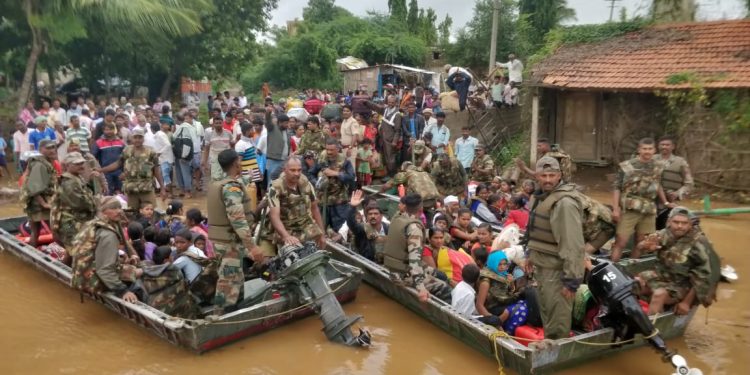 Chief Minister B S Yediyurappa said many villages in Kalaburagi, Vijayapura, Yadgir and Raichur districts were either completely or partially submerged due to floods caused by heavy rains last week and he would undertake an aerial survey of the affected areas on October 21.

There was no loss to human lives anywhere in the flood affected areas whereas two cattle died in Vijayapura, KDMA Commissioner Manoj Rajan said.

A total of 111 villages in the four districts have been affected by the floods, caused by heavy rains and water released by the dams in neighbouring Maharashtra.

“Two NDRF, one SDRF and one Army column have been deployed in Kalaburagi while two Indian Air Force helicopters are on standby. Similarly, the NDRF and the Army personnel are deployed in other three districts. Situation is under control,” Rajan told PTI.

Yediyurappa said the floods have also resulted in damage to the crops.

“In the given circumstances, it has become necessary to carry out an aerial survey to understand the actual situation.

Against this background, I will be carrying out an aerial survey of Kalaburagi, Yadgir, Raichur and Vijayapura on October 21,” he said in a release in Bengaluru.

Bhima, the major tributary of Krishna, has been in spate for the past one week due to the torrential rains in neighbouring Maharashtra and in parts of Karnataka.

The river was flowing 4.45 metres above the danger level and 1.61 metres above its previous Highest Flood Level, the Central Water Commission in its latest update.

According to the KDMA, as many as 55 villages across six taluks of Kalaburagi, thirteen villages in three taluks of Yadgir and 26 villages of Vijayapura were badly affected by the floods.

The authority said it has also identified 157 villages in Kalaburagi, 45 villages in Yadgir and 26 villages in Vijayapura as vulnerable.

Expressing solidarity with the flood-hit people, Prime Minister Narendra Modi has assured the state of every cooperation from the Centre.

This is the third time the state has been hit by floods in the past three months following heavy monsoon rains.