Andhra Pradesh, which is demanding Telangana to stop hydel power generation at Srisailam and Nagarjuna Sagar, deployed its force on its side in Guntur district. Telangana also tightened the security on the border at Suryapet district. 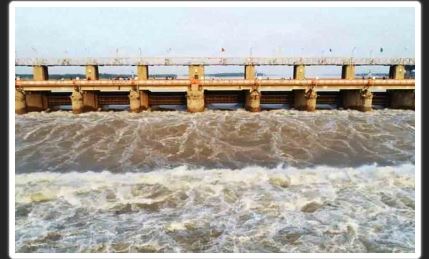 720
VIEWS
Share on WhatsappShare on FacebookShare on TwitterShare on Telegram

Hyderabad, (Aryavarth) Amid growing tension between Telangana and Andhra Pradesh over sharing of river waters and electricity generation, both the states have deployed armed police personnel at dams and power plants across Krishna river.

Security has been tightened by both the states at Nagarjuna Sagar and Pulichintala projects.

Andhra Pradesh, which is demanding Telangana to stop hydel power generation at Srisailam and Nagarjuna Sagar, deployed its force on its side in Guntur district. Telangana also tightened the security on the border at Suryapet district.

Andhra police personnel also stepped up security at Pulichintala project. Over 100 policemen were deployed near the project amid a tense situation.

The government of Andhra Pradesh has taken strong exception to Telangana starting hydel power generation at full capacity at Srisailam and Nagarjuna Sagar projects despite low water levels in Pulichintala. It also registered protest with the Union Ministry of Jal Shakti.

The Telangana police on Thursday also stopped a team of Andhra officials from visiting the power generation unit. The team wanted to meet the chief engineer of Telangana Power Generation Corporation to submit a memorandum.

The police took up checking of vehicles on the bridge and stopped tourists as a precautionary measure.

Meanwhile, the war of words continued between the two states. The row over power generation erupted even as the two states were sparring over Rayalaseema Lift Irrigation Project (RLIP).

Telangana has taken exception to Andhra going ahead with construction of RLIP saying this would harm its interests. It urged Krishna Water Management Board to stop Andhra from going ahead with the works.

The Andhra Pradesh Cabinet on Wednesday decided to lodge a complaint with Prime Minister Narendra Modi against the ‘illegal drawal’ of Krishna water by Telangana from Srisailam and Nagarjuna Sagar (NSP) for power generation.

Telangana’s tourism minister Srinivas Goud on Thursday said the comments made by Andhra ministers were objectionable. He reiterated that Andhra immediately stop works on RLIP.