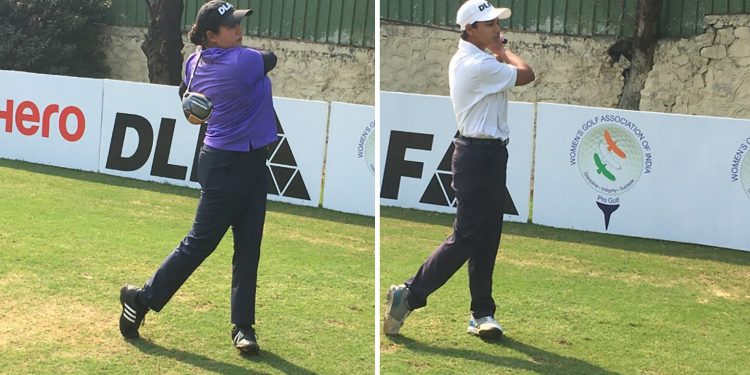 489
VIEWS
Share on WhatsappShare on FacebookShare on TwitterShare on Telegram

Pune, (Aryavarth) Amandeep Drall and Hitaashee Bakshi endured a double bogey each, but still managed a share of the lead at the end of the first round of the fourth leg of the Women’s Pro Golf Tour at the Poona Club Golf Course here on Wednesday. Both of them shot 3-under 68 each at the par-71 layout.

The duo was one shot clear of surprise third place holder Jyotsana Singh, who despite two late bogeys carded 2-under 69.

Amandeep, leader on the Hero Order of Merit, who showed signs of a revival in fortunes last week with a runner-up finish, continued that this week with a card of 68 that included six birdies, a bogey and a double bogey.

Hitaashee’s elder sister Jahanvi and Ridhima Dilawari were also under par at 1-under 70, while seven players, including players with a fair bit of experience on the Ladies European Tour, shot even par rounds. The seven players tied for sixth were Tvesa Malik, Diksha Dagar, Vani Kapoor, Seher Atwal, Ananya Datar, Khushi Khanijau and amateur Khushi Hooda.

Amandeep Drall opened with birdies on first and fourth but soon after had a bogey on the Par-4 fifth and a double bogey on the Par-5 seventh. She recovered well with four birdies against no bogeys between ninth and 16th for a 68.

Hitaashee, who broke through for her first pro win in December 2020, birdied three in a row from 12th and had three other birdies. She dropped a bogey on Par-4 eighth and a double on Par-4 11th.

Tvesa Malik, playing her first event in 2021, carded even par but was disappointed that two of her three bogeys came on Par-5s, the 12th and 18th.

Last week’s winner amateur Avani Prashanth did well to recover from a difficult start of bogey-bogey to card 2-over 73 and was lying T-15.

For the second week running, there was a hole-in-one as Rhea Purvi Sarvanan aced the Par-3 182-yard 16th hole, but she also had a triple bogey on the Par-5 eighth hole and carded 2-over 73. While there was one ace, there were two eagles. Shriya Vivek (73) holed her second shot on the Par-4 10th and Ishvari Prasanna eagled the Par-5 12th.

Things did not work as per plan for Gaurika Bishnoi as she shot 4-over 75.