Rohit was the first to go as he got out caught behind on a peach of a delivery bowled by Jofra Archer in the fourth over of the innings. The 32-year-old scored just six runs off the nine deliveries he faced.

326
VIEWS
Share on WhatsappShare on FacebookShare on TwitterShare on Telegram

Chennai,(Aryavarth) India on Sunday lost both their openers Rohit Sharma and Shubman Gill as they reached 59/2 in their first innings at Lunch in reply to England’s 578 on Day Three of the first Test here at the MA Chidambaram Stadium.

Rohit was the first to go as he got out caught behind on a peach of a delivery bowled by Jofra Archer in the fourth over of the innings. The 32-year-old scored just six runs off the nine deliveries he faced.

Cheteshwar Pujara, who came in next, then tried to steady the Indian ship with Gill as they both played cautiously against both Archer and James Anderson.

Gill, in particular, looked in great control and played some lovely shots before he was caught at mid-on by Anderson at his individual score of 29. He scored five boundaries in the 28 balls he faced during the course of his innings which was brought to an end by Archer.

Skipper Virat Kohli and Pujara then made sure the hosts didn’t lose any further wickets as India went into the Lunch break at 59/2, trailing by 519 runs. Kohli and Pujara remained unbeaten on 4 and 20 respectively.

Earlier in the day, England added 23 runs to their overnight score of 555/8 before getting bowled out for 578.

Dominic Bess was the first wicket to fall in the day as he got out lbw against Jasprit Bumrah after scoring 34 runs off 105 balls. James Anderson then was out bowled by off-spinner Ravichandran Ashwin for just one.

England skipper Joe Root scored a brilliant 218 and was the star performer for the visitors. Root faced 377 balls and smashed 19 fours and two sixes during the course of his innings as he became the first-ever batsman to score a double hundred in his 100th Test.

For India, Jasprit Bumrah and Ravichandran Ashwin were the pick of the bowlers as they both scalped three wickets each in 36 and 55.1 overs respectively. Ishant Sharma and Nadeem picked two-two wickets while Washington Sundar remained wicketless. 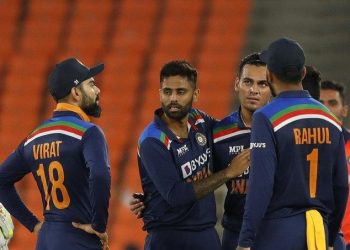 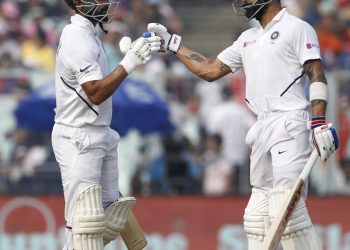