Sand must be distributed for free: Andhra BJP chief 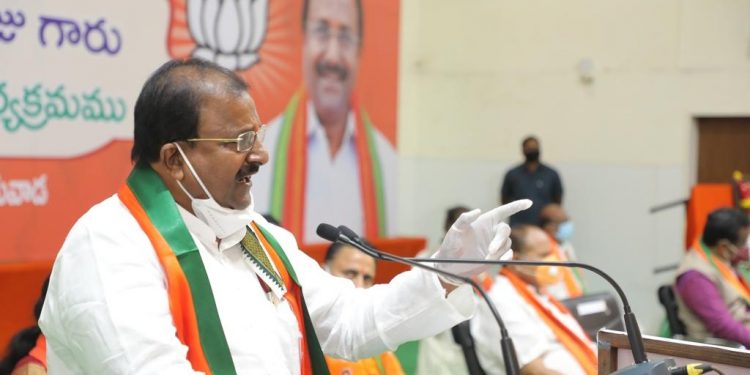 304
VIEWS
Share on WhatsappShare on FacebookShare on TwitterShare on Telegram

Amaravati,(Aryavarth) Andhra Pradesh Bharatiya Janata Party (BJP) president Somu Veerraju called for the state government’s sand policy to be cancelled and the construction material distributed to be made free.

He called on the party cadres to protest the new sand policy at all the district collector and RDO offices in the state.

However, the state government condemned these criticisms from the opposition parties and called the sand tender process a transparent one.

He said the government is striving to maintain the same price structure at all sand reaches.

“The task of identifying the contractor has been entrusted to the Central Government Agency MSTC. It was clarified that the sand tender process was done in a most transparent way than ever in the history and awarded to Jayprakash Power Ventures Ltd., a subsidiary of Jaypee Group, which was selected by MSTC,” said Dwivedi.

According to the senior IAS officer, the company has to pay the state government once every 15 days in advance for the next 15 days for business operations.

On selecting the company, Dwivedi said that an invitation of financial bids was done only after reviewing the technical capabilities.

“Widespread publicity was given on tenders by placing tender advertisements in newspapers and the government had also decided to collect Rs 120 crore as bid security for the participation of skilled, efficient, and experienced companies. The tenders were also called online to avoid any fear or hesitation in submitting bids,” he said.

Dwivedi said that out of Rs 475 per metric tonne at the sand reach, Rs 375 go directly to the exchequer and at this rate for a sand supply target of two crore metric tonnes per annum the value is Rs 950 crore.

“Of this, the contractor has to pay Rs 765 crore to the government and the remaining money will go to the contracting company under maintenance and operational costs,” he said.

He asserted that the new sand policy will benefit the people and highlighted that buyers could carry sand from any reach at the same price, including providing buyers the option of using their own vehicles to carry sand.

Likewise, Dwivedi said strict action will be initiated against those people who are selling sand at a higher price than the price set by the government.

He called for complaints to be lodged at 14500 on sand irregularities and said that a special enforcement bureau (SEB) has already been set up to deal with the complaints.

Adhering to the new policy, people can buy any amount of sand at Rs 475 per metric tonne at the reach while traders are not allowed to sell sand at a higher price than the one fixed by the government.

“Sand will be given at a subsidized cost for the construction of houses for the weaker sections, the R&R colonies and those living near the reaches,” Dwivedi added.