On Sunday, Raje visited Govind Dev Temple and Kale Hanuman Temple in the city and offered prayers. Her followers, who were accompanying her, chanted slogans like "Kesariya men Hara Bhara, Rajasthan mean Vasundhara". 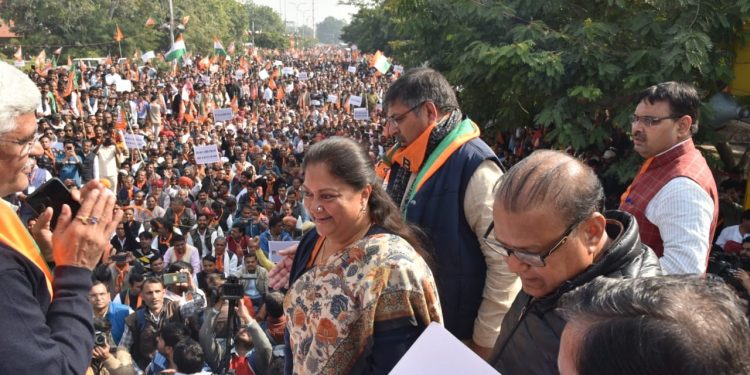 Jaipur, (Aryavarth) The “power play” by a “fragmented” BJP appeared to be gaining steam with former Rajasthan Chief Minister Vasundhara Raje looking all set to kick off her much talked-about religious yatra from March 8, which is co-incidentally her birthday and as well as the International Women’s Day.

The yatra shall pass through Krishna Temples in the state.

On Sunday, Raje visited Govind Dev Temple and Kale Hanuman Temple in the city and offered prayers. Her followers, who were accompanying her, chanted slogans like “Kesariya men Hara Bhara, Rajasthan mean Vasundhara”.

If the Bharatiya Janata Party (BJP) sources are to be believed, the proposed yatra is expected to be the biggest-ever gathering Raje has ever organised.

She is likely to start her yatra from Aadi Badri temple and shall go to Shri Nath temple and other Krishna temples of Rajasthan.

According to sources, the yatra is going to witness a really huge gathering. It would include a convoy of 800-900 vehicles.

Rajasthan in-charge Arun Singh, however, during his visit to the state recently, expressed his ignorance about any religious yatra planned by Raje.

“Religious yatras are being taken by saints and sanyasis as far as I know,” he quipped.

BJP state president Satish Poonia was in Delhi on Saturday where he discussed state issues at length. The party’s preparations related to bypolls in four districts were also discussed in this meeting.

Further, as BJP national president JP Nadda is expected to visit the state on March 2 (Tuesday), an action plan during his visit was also discussed in the meeting.

BJP sources said “this is pressure politics being followed by Raje to ensure she is announced as BJP’s Chief Ministerial face for forthcoming polls”.

However, Arun Singh, talking to the media here questioned what is the need of announcing CM face. “BJP has won many elections in the country without announcing CM face,” he said when asked about the proposed CM face of the party for the forthcoming polls.

Meanwhile, Raje followers are quite happy with this yatra and are making hectic preparations for blood donation camps and fruit distribution drive which shall be organised here during her yatra.

It needs to be mentioned here that Raje was maintaining distance from party office and party meetings in Rajasthan since last many months.

However, this time, after meeting Prime Minister Narendra Modi and other leaders, she attended the core committee meeting in the state party headquarters recently.