Raje takes temple route for Yatra to show her strength

Raje, since the appointment of a new state leadership in the BJP, has distanced herself from the party office and its activities. However, her followers have been pressuring her to play aggressive politics for combating the other group, fearing they will lose their presence on ground in the next elections if she sits quiet.

272
VIEWS
Share on WhatsappShare on FacebookShare on TwitterShare on Telegram

Jaipur,(Aryavarth) If sources in the Rajasthan Bharatiya Janata Party are to be believed, the former Chief Minister Vasundhara Raje Scindia is going to start a Yatra on her birthday on March 8 from a Krishna Temple, Adi Badri Dham, situated in Bharatpur district, in a bid to display her show of strength in the state.

Raje, since the appointment of a new state leadership in the BJP, has distanced herself from the party office and its activities. However, her followers have been pressuring her to play aggressive politics for combating the other group, fearing they will lose their presence on ground in the next elections if she sits quiet.

Raje is BJP, BJP is Raje in Rajasthan’ triggers tumult in state unit

Her staunch supporter and former minister Yunus Khan was in the town in the last few days reportedly to perform a recce of the place from where she will start the Yatra.

Raje supporters, including former MLAs and MPs, are working hard to make this show of strength a success.

In fact, there are one or two faces who have also been in the present working committee of the BJP and are still supporting the former CM.

The action plan for the grand event will include a convoy with over 1,000 fleet of cars which will be more like a grand road show.

“Bharatpur is near to her place Dhaulpur and hence many people can be a part of the show. Also starting her yatra from the Krishna Temple, she shall give a strong political message,” said sources.

It needs to be mentioned here that Raje met Union minister Amit Shah on Tuesday and matters regarding Rajasthan state politics were discussed in the meeting.

She reportedly expressed her annoyance for being kept isolated in major decision making issues of the party in state-related matters. Also, she was unhappy that her loyals in the party were not being given decent positions. Issue of her son not being given a cabinet portfolio was another subject of discussion, sources confirmed.

Now, the former CM is all set to take out the Yatra to give a strong political message to team leaders.

Earlier, her followers have left the saffron party shocked by announcing 25 district presidents of a solo entity ‘Team Vasundhara Raje’ floated in December 2020, and made the list viral on social media.

It needs to be mentioned here that social media is abuzz with activities of a group ‘Vasundhara Raje Team 2023’ where she is being projected as the next CM face.

Meanwhile sources said that all those active on social media till date in these groups will be a part and parcel of the Yatra too.

Also, recently, another new group has appeared on social media with the name of ‘Team Vasundhara Raje kisan Morcha’ and presidents for the same have been appointed in 10 districts, says a post on the group.

This group is again active and projects Raje as the next CM. Meanwhile, the present BJP leadership is monitoring all developments and keeping a strong vigil on all activities, said a team leader adding that if there is a need, the state leadership will approach central leadership with a complete report on such activities.

Meanwhile, a Raje supporter said, “She needs to get aggressive in state politics because this is the time when she should start ground working.”

In 2018 too, she held the Rajasthan Vikas Yatra from Rajsamand’s Charbhuja temple, however, she lost the 2018 Assembly polls to the Congress. 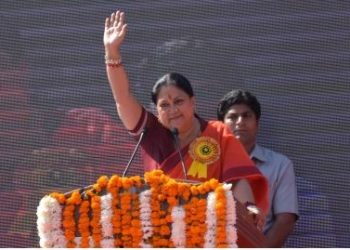 Raje is BJP, BJP is Raje in Rajasthan’ triggers tumult in state unit