The present posters have Prime Minister Narendra Modi and party national chief J.P. Nadda on one side and Satish Poonia and Gulab Chand Kataria on the other side but no picture of Raje anywhere. 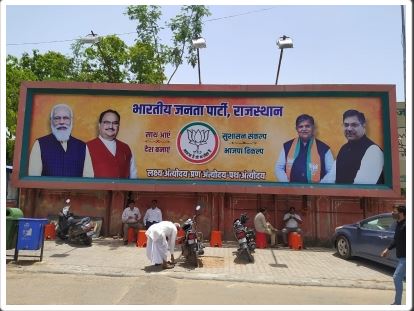 Jaipur,(Aryavarth) In a recent development in Rajasthan politics, former Chief Minister Vasundhara Raje’s posters have been removed from the BJP state headquarters.

The present posters have Prime Minister Narendra Modi and party national chief J.P. Nadda on one side and Satish Poonia and Gulab Chand Kataria on the other side but no picture of Raje anywhere.

In other posters, they have brought veteran leaders Deendayal Upadhyay and Syama Prasad Mookerjee as mark of tribute to senior leaders.

BJP officials said that the central leadership have issued a guideline that all BJP posters in state as a rule should have CM and state president’s picture along with Modi’s and Nadda’s while in states where BJP is in opposition, there shall be picture of state BJP president and leader of opposition with Modi and Nadda and hence comes this change.

In last few months, Raje has been seen maintaining distance and difference from state party office and state party leaders and has been seen promoting ‘Brand Raje’ keeping herself aloof from all state BJP activities.

She has been seen engaged in promoting ‘Vasundhara Raje Rasoi’ when the party is running ‘Sewa hi Sangathan’ campaign.

Also her followers have been running a ‘Team Vasundhara Raje 2023’ campaign on social media projecting her as next CM face of Rajasthan for BJP.

Also, she has been running ‘Office of Vasundhara Raje’ handle on Twitter to help needy during pandemic when BJP was running its own handle to help those who wanted medicines, oxygen, beds etc.