The police have filed criminal charges against eight journalists so far, who covered the protest in Delhi. The Editors’ Guild of India has criticised the action, stating that it was “an attempt to intimidate, harass, browbeat, and stifle the media.” 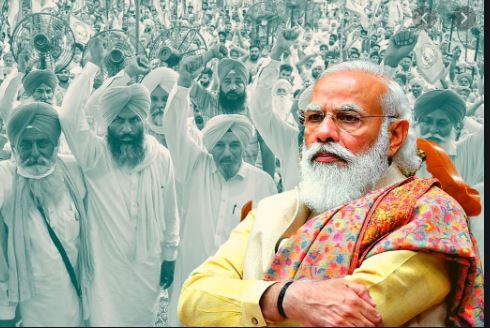 Prime Minister Narendra Modi in his Parliamentary speech, said a new community has come up in the country — Andolan jivi (one who thrives on protests)– who can be spotted in every protest and are parasite for the nation. Mr. Modi spoke about a new breed of protesters- Aandolan-jeevi, who could be seen at every agitation. “These parasites feast on every agitation. When they are not in the front, they operate from behind the curtains, they cannot survive without agitation,” he observed. This shows how India’s PM looks at protestors.

Globally this is being noticed, The Economist has done a story on India in this week’s edition, it is headlined  as “India’s government is censoring people before they comment”.  It quotes Idi Amin, late Ugandan dictator, who said, “There is freedom of speech, but I cannot guarantee freedom after speech.”

The article in Economist says “India’s government seems to be taking this concept one step further. Despite running what is often hailed as the world’s biggest democracy, it has gained a taste for curtailing freedom before speech.”

This is how the world has interpreted the government’s handling of Farm Protests, lodging of cases against journalists and evoking sedition laws on many. The crackdown on journalists and activists has found itself not just in news media but also on social networking platforms. India’s IT ministry recently ordered Twitter to block the accounts writing in favour of the farmer protests claiming that they were inciting public disorder in the country. Among those was the account of The Caravan magazine, a vocal print magazine publishing analytical long-form stories on various political issues.

The police have filed criminal charges against eight journalists so far, who covered the protest in Delhi. The Editors’ Guild of India has criticised the action, stating that it was “an attempt to intimidate, harass, browbeat, and stifle the media.”

According to a media agency, 55 Indian journalists were threatened, arrested and booked by the Centre and state governments for their reporting on COVID-19. FIRs have been filed against several journalists of both regional and national media. The sum total of the crackdown was published in a report by Delhi-based Rights and Risk Analysis Group, that said, as journalists were charged for “exercising freedom of opinion and expression during the national lockdown between March 25 and May 31, 2020.”