A party insider said that BJP chief J.P. Nadda, who is on a two-day visit to Himachal Pradesh, will be returning to New Delhi on Tuesday evening. "Nadda ji has reached Himachal Pradesh to attend his personal and organisational program. He is reaching Delhi later today for some important work," he said. 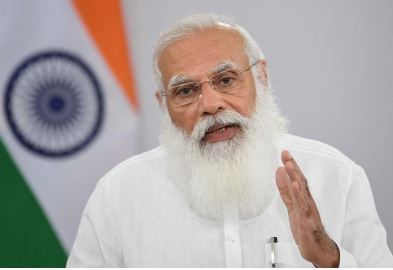 369
VIEWS
Share on WhatsappShare on FacebookShare on TwitterShare on Telegram

New Delhi,(Aryavarth) Amid strong buzz in the political circle about possible reshuffle in the union cabinet later this week, first in the second term of the Narendra Modi government, sources said that cabinet reshuffle is likely to take place in a couple of days and BJP MPs are asked to reach the national capital at the earliest.

However, there is no confirmation from the party or the government about the time of possible cabinet reshuffle.

A party insider said that BJP chief J.P. Nadda, who is on a two-day visit to Himachal Pradesh, will be returning to New Delhi on Tuesday evening. “Nadda ji has reached Himachal Pradesh to attend his personal and organisational program. He is reaching Delhi later today for some important work,” he said.

Sources said that ahead of reshuffle the Prime Minister is likely to hold a meeting with senior ministers and party chief Nadda in the evening but there is no confirmation about the meeting.

Party functionaries claimed that calls were made to several party leaders who are expected to be inducted in the cabinet, to reach Delhi. “Following the direction of party leadership, former Assam Chief Minister Sarbananda Sonowal, Rajya Sabha member Jyotiraditya Scindia are reaching Delhi today,” he said.

Sources said that Jyotiraditya Scindia, who is likely to be inducted in Modi cabinet, has cut short his visit to Indore in Madhya Pradesh and is reaching the national capital in evening. “Earlier Scindia is expected to take on a flight from Indore to Delhi on July 7 at 11 a.m. But after he was asked to reach Delhi at the earliest, Scindia is leaving for Delhi from Indore at 3.30 p.m. on Tuesday. Before leaving for Delhi, Scindia took blessings at Mahakal Temple in Ujjain,” said a BJP leader aware of the Scindia program.

Amid the buzz, a video of former union minister late Ram Vilas Paswan’s brother Pashupati Paras went viral in which he is seen buying clothes for his new ‘kurta’ he is likely to wear in swearing in ceremony.

“Inducting Paras in the cabinet will also clarify BJP’s stand that which faction of the Lok Janshakti Party (LJP) has the support of the Prime Minister and the saffron party,” a party leader said.

Another BJP functionary said that alliance partner Janta Dal United (JD-U) leaders — R.C.P. Singh and Rajeev Ranjan ‘Lallan’ are also reaching the national capital. “JD-U who did not join the Modi government in 2019 is likely to get two ministerial berths while the party is asking for three,” he said.

Apna Dal chief Anupriya Patel is also likely to be made minister. She was part of the Modi government in the first term.

Party sources claimed that reshuffle is due and it will happen before the monsoon session of parliament starting from July 19 but it may happen in the next few days. “Cabinet expansion is due to fill up the vaccines and it is believed that it will happen soon this week,” he said.

Sources claimed that few ministers will be dropped and they will be accommodated in some other position.

“Union Minister Thaawar Chand Gehlot has been appointed governor of Karnataka. More ministers and especially those above 70 years are likely to be dropped and might be appointed governor, Gehlot is aged around 73 years. We heard that the Prime Minister is likely to induct young faces to give a new look to his cabinet,” they said.