Mahapanchayat of 360 villages Held, Delhi-Gurgram Border will be sealed in support of Farmers 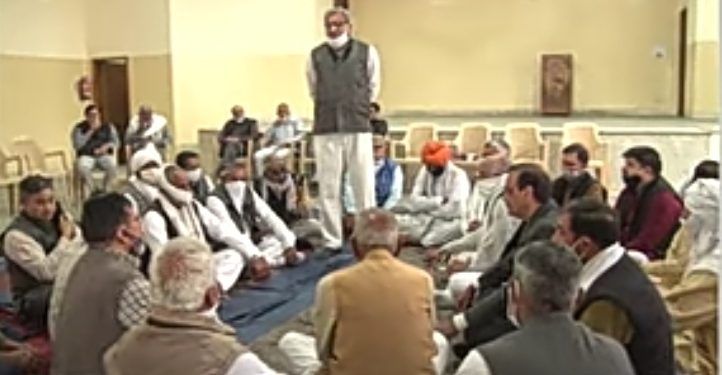 Gurugram, Dec 2 (Aryavarth) To support the ongoing farmers’ demonstration against three farm ordinances passed by the Central government, a mahapanchayat of 360 villages was held at Sir Chhoturam Bhawan in Jharsa village in Gurugram on Wednesday.

The meeting was chaired by Chaudhary Mahender Singh Thakran, president of 360 villages Jharsa Khap, where representatives of all the Khaps participated.

During the meet it was decided that if the Central government does not accept the demands of the farmers, then the entire Delhi-Gurgram will be sealed.

All the representatives of the Khap decided to support the farmers’ movement in solidarity and said that the Central government is doing injustice to the farmers. They also warned that if required, they will also travel to participate in the movement.

The representative also asserted that the government must act fast on their decision related to the farm laws, otherwise the delegation of 360 villages will stop all the necessary supplies to the national capital.

“Before implementing the farm laws, the Central government should have discussed it with the farmers. The decision was taken at their own level,” Chaudhary Mahender Singh Thakran said.

The farmers who attended this mahapanchayat issued a warning to the government, declaring that if the results of the talks on December 3 do not yield meaningful results, all the areas adjoining Gurugram will be sealed like the Singhu border, Tikri border and UP border.