Lalu Prasad alleged that the deceased did not get treatment when they were alive and are not even getting shrouds after their death. 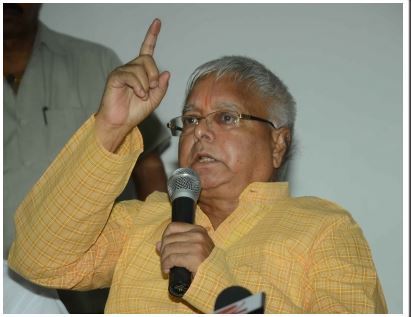 453
VIEWS
Share on WhatsappShare on FacebookShare on TwitterShare on Telegram

Patna,(Aryavarth) After scores of decomposed and half burnt bodies were found floating in the Ganga river, former Bihar Chief Minister and Rashtriya Janata Dal (RJD) president Lalu Prasad has targeted the government over the issue.

Lalu Prasad alleged that the deceased did not get treatment when they were alive and are not even getting shrouds after their death.

Lalu Prasad tweeted, “While they were alive they did not get medicine, oxygen, beds and treatment. Now after death, no shrouds, wood, and the ground where they could be cremated. Out of extreme miseries dead bodies were thrown into the Ganges. Dogs are eating corpses. Hindus are being buried. Where are you taking this country and humanity?”

Tejaswi wrote on Twitter, “Hundreds of corpses were found floating in the Ganges in Bihar’s Buxar. Imagine how terrible the situation is. The government is still in denial and not accepting the ground reality. The double engine government has failed, so now the infection has spread to the villages as well. After hospitals, there is no place even in crematoriums? People are forced to throw dead bodies into the river.”

Several bodies have been recovered in Chausa in Buxar district of Bihar. After this, a net has been placed in the Ganges river at the border to stop the bodies from coming into Bihar.