"With demand and consumption declining over a month since the lockdown was imposed on April 27, farmers and horticulture growers are suffering a huge loss, as they are forced to sell their produce at a low price in distress," the party's state unit chief D.K. Shivakumar told reporters in Dharwad. 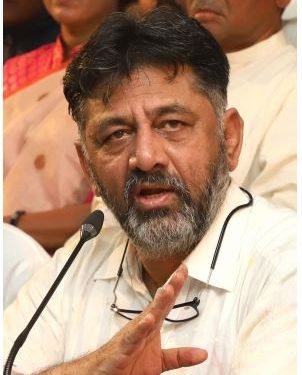 336
VIEWS
Share on WhatsappShare on FacebookShare on TwitterShare on Telegram

Dharwad (Karnataka),(Aryavarth) The opposition Congress on Monday urged the Karnataka government to bail out the farmers reeling under the impact of the Covid-induced lockdown which has been extended to contain the pandemic, as they are forced to sell their produce at a distress price.

“With demand and consumption declining over a month since the lockdown was imposed on April 27, farmers and horticulture growers are suffering a huge loss, as they are forced to sell their produce at a low price in distress,” the party’s state unit chief D.K. Shivakumar told reporters in Dharwad.

Drawing the state government’s attention to the plight of lakhs of farmers who are unable to recover even their production cost, Shivakumar said the state’s agriculture marketing federation should buy their produce, especially vegetables and fruits, directly from them at market price to provide relief to them.

“The extended lockdown has forced farmers across the state to sell their produce for a pittance. In fact, many of them have either stopped harvesting or are dumping the perishable vegetables like tomatoes on the roadside, as they are unable to bear the cost of labour and transportation,” Shivakumar said.

With hotels and eateries shut and large gatherings for weddings and religious functions banned due to the lockdown, Shivakumar said the demand for farm and horticulture produce has slumped by over 50 per cent due to the proportionate decline in consumption.

“Though the lockdown is relaxed from 6-10 am to enable people to buy their daily needs, including vegetables, fruits, flowers and essential commodities, the four-hour window is too short for the farmers to transport their produce and sell enough to recover even their production costs,” asserted Shivakumar, who is a farmer by occupation.

After interacting with the farmers from Dharwad and Haveri districts, the state Congress president said that Chief Minister B.S. Yediyurappa should direct the food and civil supplies department to buy farm produce directly from the farmers and sell them in the retail market at fixed prices.

“The Rs 1,111 crore relief package announced by the Chief Minister recently is not enough to compensate all sections of people, especially the farmers for the loss they are incurring due to the lockdown disruptions,” he said.

Noting that farmers are unable to buy seeds and fertilisers for the new sowing season due to financial distress, Shivakumar said the state government should provide interest-free credit for investing in the next crop (Kharif) season.

“The relief aid for growers of fruits, vegetables and flowers should be increased to Rs 10,000 from Rs 4,000 per acre being offered to them now, as the pandemic has devastated the agrarian economy,” Shivakumar added.