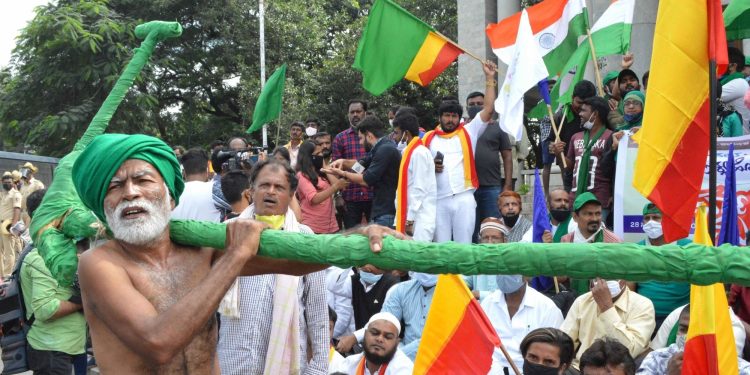 Bengaluru: Members of various organisations along with farmers stage a demonstration against contentious agricultural laws in Bengaluru on Sep 28, 2020. (Photo: IANS)

Bengaluru, (Aryavarth) Thousands of farmers across Karnataka would join ‘Bharat bandh’ on December 8 to protest against the 3 controversial farm laws and in support of their repeal, Karnataka Rajya Riatha Sangha president K. Chandreshekar said on Sunday.

“All members of about 300 farmers’ organisations will participate in the day-long bandh on Tuesday in cities and towns across the state except in Bengaluru, where it (shutdown) will be observed on Wednesday for logistic reasons,” Chandrashekhar told reporters here.

“As all our members will observe Bharat bandh in towns and villages across the state on Tuesday, they will come to Bengaluru on Wednesday to hold a day-long shutdown in protest against the laws and demand their withdrawal,” he said.

Extending support to hundreds of farmers in northern states staging protests in Delhi or over 10 days against the laws, Chandrashekar said the ryots in the state were also opposed to the APMC bill and the land reforms bill the BJP government had moved in the state Assembly in September, as these were against farmers’ welfare.

A dozen members of the Sangha led by Chandrashekar participated for 3 days last week in the farmers’ agitation on the Delhi border with Punjab, Haryana and Uttar Pradesh.

Scores of trade associations and labour organisations, opposition Congress and Janata Dal-Secular are extending support to the 2-day shutdown on December 8 and 9 by the farmers in Karnataka.

Chandrashekar said: “About 50,000 farmers and workers will descend on Bengaluru from across the state on Wednesday in buses, trucks and tractors to lay siege on Vidhan Soudha, as it will be in session for passing the bills.”

The farmers plan to court arrest if police prevent them from going to Vidhan Soudha due to prohibitory orders in view of the week-long winter session of the legislature from December 7-15.

“The farmers will hold processions, rallies and public meetings at Freedom Park in the city centre against the anti-farmer laws and bills of the central and state governments,” said Karnataka farmer organisations union President K. Shanthakumar.

Accusing Prime Minister Narendra Modi of ruining the agriculture sector in the country, he said the NDA government had failed to fulfil its assurance of implementing the Swaminathan Committee report.

In a related development, the Karnataka Sugarcane Growers’ Associations will stage demonstration in the city on Monday to express solidarity with farmers in northern states and support their demand to scrap the anti-farmer laws.

Association’ state Organising Secretary A. Devaraj condemned the Delhi Police for using water cannons and tear gas on farmers who were protesting peacefully at the inter-state border over a week ago.