Sarma, 52, was administered the oath of office by Governor Jagdish Mukhi at the famous Srimanta Sankardeva Kalakshetra in Guwahati. 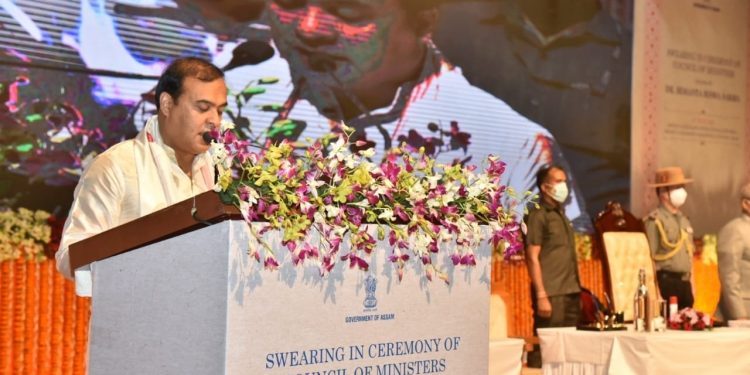 Guwahati,(Aryavarth) One of the powerful politicians in the entire northeastern region, Himanta Biswa Sarma on Monday sworn-in as the 15th Chief Minister of Assam, a day after he was named as the leader of the newly-elected BJP legislators in the state.

Sarma, 52, was administered the oath of office by Governor Jagdish Mukhi at the famous Srimanta Sankardeva Kalakshetra in Guwahati.

Urging the outlawed terror outfits to shun the path of violence and come to the negotiation table, minutes after taking oath as Chief Minister of Assam, Sarma said that an effective roadmap would be finalised in the first cabinet meeting on Tuesday to curb the “alarming rise of the coronavirus in the state”.

Prime Minister Narendra Modi congratulated Sarma on taking oath as a new Chief Minister of Assam and other Ministers, wishing the “new team will add momentum to the development journey of Assam and fulfil aspirations of the people”.

State BJP President Dass, Pegu, Singhal, Bora and Brahma are the five new faces and have been inducted as Ministers for the first time.Of the 13 ministers excluding the Chief Minister, there are two — Atul Bora and Keshb Mahanta are from AGP while U.G. Brahma belongs to UPPL. While Chief Minister Sarma and 11 other ministers took oath in Assamese, Parimal Suklabaidya, who elected from southern Assam, took oath in Bengali, Brahma, a former Rajya Sabha MP and Sahitya Akademi awardee, took oath in the Bodo language and BJP MLA Ashok Singhal took oath in English.