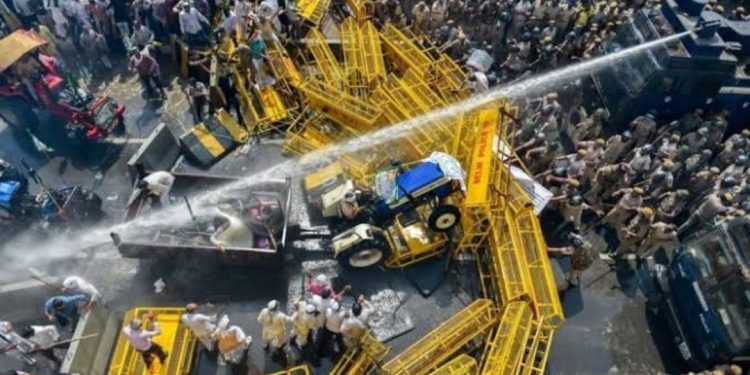 Harrowing time for motorists amid farmers' protests in Hry.

Chandigarh, (Aryavarth) Tens of thousands of farmers up in arms on Thursday braved tear gas shells and water cannons to break through police barricades at several places on the Punjab-Haryana border while heading to the national capital to lodge their protest over the Centre’s new agriculture laws.

Marching through Haryana where there were joined by local farmers, the farmers decided to stop for the night at Panipat close to the national capital.

In a major late night development, the Bharti Kisan Union Ekta-Ugrahan also decided to start their journey from the Khanauri border in Punjab’s Sangrur district on Friday.

BKU-Ugrahan President Joginder Ugrahan said: “If we are not allowed to cross Haryana and head towards Delhi, our protest destination will be the border points for a week.”

Earlier in the day, several protesters and policemen were injured as farmers broke barricades and threw them down from a bridge ahead of the Punjab-Haryana border in Shambhu in Punjab’s Patiala and near Haryana’s Ambala.

Bracing overnight rains and chilly winds, thousands of protesting farmers assembled at various places along the Haryana-Punjab borders on Thursday morning to head towards the national capital for their ‘Dilli Chalo’ protest, but were stopped by the Haryana Police.

Thousands of farmers had been staging sit-in protests ahead of the Dabwali barrier between Punjab’s Bathinda and Haryana’s Sirsa districts and at Khanauri border in Sangrur district, awaiting the decision by their leaders to move towards Delhi.

While activists of the Bharti Kisan Union Ekta-Ugrahan and Sidhupur factions had been camping on the border at Khanauri and Moonak, respectively, since Wednesday evening, other farmer unions changed their plans and decided to head for Delhi from other entry points, like Shambhu.

A huge contingent of police comprising the Rapid Action Force had been deployed at all entry points in Haryana, while residents of several towns located along the Punjab-Haryana border faced a harrowing time due to the heavy deployment of the security forces and snapping of the bus services in the past 24 hours.

Unfazed by the heavy security deployment and barricading on the highway with mounds of earth and huge rocks, protesting farmer Gurdev Singh told the media at the Shambhu border that “We will break all the barricades if we were not allowed to move ahead.”

Farmers said they were ready to face bullets also.

Despite the use of water cannons and tear gas, the protesting farmers, comprising men and women — both young and old — and school and college students riding tractor-trailers, cars and motorcycles, managed to enter Haryana from Shambhu.

Angry farmers threw stones at security forces deployed to control the crowd at the Shambhu border.

They were later joined by thousands of their counterparts from Haryana.

As they reached Kurukshetra district, the local farmers joined them.

As per the police estimates, around 300,000 farmers from both states are set to reach Delhi.

The farmers affiliated to 33 organisations are part of the United Farmers Front, an all-India body of over 470 farmers’ unions that will participate in the indefinite protest in the national capital.

He also blamed his Punjab counterpart Amarinder Singh for “inciting the farmers”.

Reacting to his accusations, Amarinder Singh replied on Twitter: “Shocked at your response. It’s the farmers who’ve to be convinced on MSP, not me. You should’ve tried to talk to them before their ‘Dilli Chalo’. And if you think I’m inciting farmers then why are Haryana farmers also marching to Delhi?”

Meanwhile, condemning the use of water cannon and tear gas, former Punjab Deputy Chief Minister Sukhbir Badal said: “Today is Punjab’s 26/11. We are witnessing the end of the right to democratic protest. The Akali Dal condemns the Haryana government the Centre for choosing to repress the peaceful farmer movement.”

He said the battle for the rights of Punjab farmers cannot be throttled by using water cannons against them.

Supporting the protest by farmers, Delhi Chief Minister Arvind Kejriwal said the peaceful demonstration was a constitutional right of the farmers.

The Delhi Police has already asked the farmers not to enter Delhi as they don’t have permission to protest in the city.

Farmers protesting against the farm laws have expressed apprehension that these laws would pave the way for the dismantling of the minimum support price system, leaving them at the mercy of big corporate entities.