Cong disrupts K’taka Assembly over ‘One Nation, One Election’

The din in the Assembly forced speaker Vishweshwara Hegde Kaageri to adjourn the House twice. 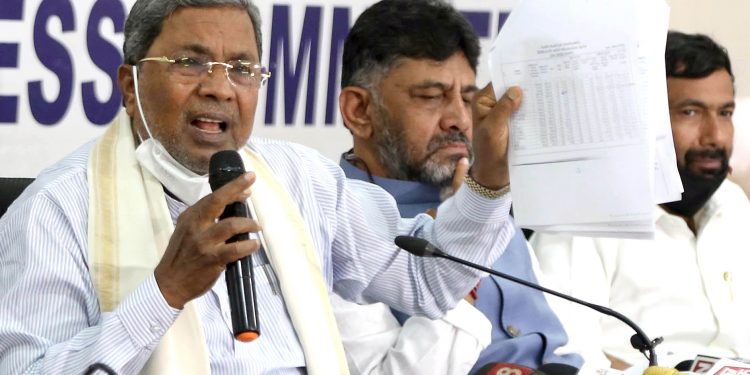 317
VIEWS
Share on WhatsappShare on FacebookShare on TwitterShare on Telegram

Bengaluru,(Aryavarth) The Opposition Congress legislators, under its leader Sidddaramaiah, disrupted the proceedings of the Karnataka Legislative Assembly for the second consecutive day on Friday , over the special discussion on ”One Nation, One Election”.

The Congress party members trooped into Well demanding revocation of suspension to its member, B.K. Sangamesh, who had removed his shirt inside the House, during a protest by his party against Speaker Vishweshwar Hegde Kageri’s decision to hold a special discussion on One Nation, One Election, on Thursday.

The din in the Assembly forced speaker Vishweshwara Hegde Kaageri to adjourn the House twice.

Sticking to his guns, Leader of the Opposition, Siddaramaiah alleged that One Nation One Election is Sanghaparvar’s agenda and his party cannot allow this debate on the floor of the House.

He announced that the party would continue to protest until the suspension of Sangamesh was revoked.

“We are fighting for justice. Why would he protest in such manner if he and his family was not harassed to that extent. As speaker you should have heard him patiently before pronouncing your ruling,” he said.

In a strong rebuttal, Kaageri asserted that his ruling was appropriate as the member misbehaved and showed disrespect to the Assembly.

Congress members-led by Siddaramiah created a ruckus by entering into lengthy arguments with Marshals who prevented Bhadravathi MLA Sangamesh from entering the Assembly premises.

The discussion on One Nation, One Election was scheduled for March 4 and 5 at the beginning of the Budget session, following advice by Prime Minister Narendra Modi during a meeting of Speakers of Legislative Assemblies held in Gujarat.